In the liberal media world, it’s fashionable nowadays to say that Donald Trump is a racist. So in the aftermath of the NFL anthem protest, the racism accusations only increased in length and in rage.

On MSNBC’s Deadline: White House on Monday, host Nicolle Wallace and her guest panel analyzed Trump’s “rhetoric” over the weekend and whether it “made it easy for owners to stand behind their players.” On the panel, ESPN analyst Kevin Blackistone blamed Trump for racializing the weekend because the POTUS, in his words, dismissed brain disease CTE and showed a real callousness towards the [majority black] athletes.” 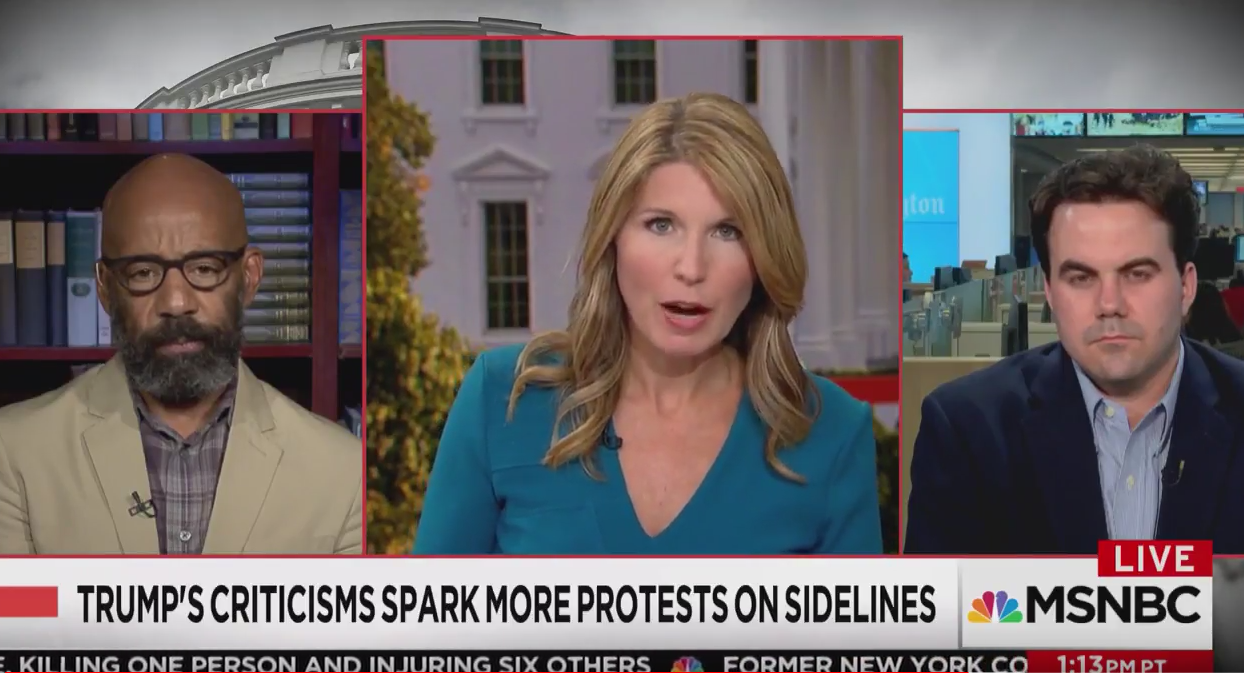 Huffington Post reporter David Moye argued that the point was valid. He translated Blackistone’s comments to mean, “The reason the president prefers violent football games is because it ensures more black men get hurt.” In his piece, “Donald Trump Prefers Violent Football So More Black Players Get Hurt: ESPN Analyst,” published on September 25, Moye reworded MSNBC’s position and presented it as fact, rather than opinion.

In the actual MSNBC segment, host Nicolle Wallace began by telling Willie Colon, “The sports fans in my life say that the bigger news from Donald Trump was that he actually had the audacity to stand up and say that the game was better when the hits were harder.”

Colon responded, “I’m not surprised by the rhetoric this man says!”

Wallace chimed in again, “Someone said that was Neanderthal.”

Colon agreed, “Yeah, I’m not expecting him to be sensitive. I mean from day one he has been dismissive, disrespectful, downright flagrant and out of bounds. Anything that comes out of his mouth, I’m not going to sit here and be shocked by it. I think it’s us that know better, do better, speak up.”

Wallace praised Colon, “You should be a political analyst!” She brought in Kevin Blackistone, from ESPN, who made this generalization:

“This is how Donald Trump has just racialized this entire weekend. And listening to Willie talk about this, the majority of this league, as we know, the NFL are black males. The majority of the injuries that result -- the concussions that result in CTE [chronic traumatic encephalopathy] are black males. When you look at stacking by position, and those positions that suffer the greatest from CTE, they are the positions that black males are more often likely to play. And so for him to dismiss that, and to dismiss CTE as something that does not exist, shows a real callousness towards the athletes, and particularly the black athletes who play this game -- he did not have to say explicitly anything about black players. But it came across loud and clear, and when you put that with his background, as Robert alluded to, it paints a really ugly picture in terms of the way that this president happens to see black America and the black males who play these sports in particular.”

From this statement, Huffington Post derived the opinion that “Donald Trump Prefers Violent Football So That More Black Players Get Hurt.”