Vulture would have us believe that being Michael Moore a “thankless task.” But what’s so tough about being a wealthy socialist who sold his lake house for $5.2 million in 2015? How hard is it  doing agitprop for communist Cuba’s health system, or making movie after intellectually bankrupt movie about how lousy America is? Certainly his daily grooming habits can’t be what you’d call oppressive.

Nevertheless, Moore is an “oracle of Delphi,” to director D.A. Pennebaker, quoted in Vulture. Jessica Pressler took the analogy further, saying Moore was “like a prophet, a Cassandra in a T-shirt,” and noted that Moore has predicted Trump’s re-election in 2020, because after all, “he is an evil genius.” 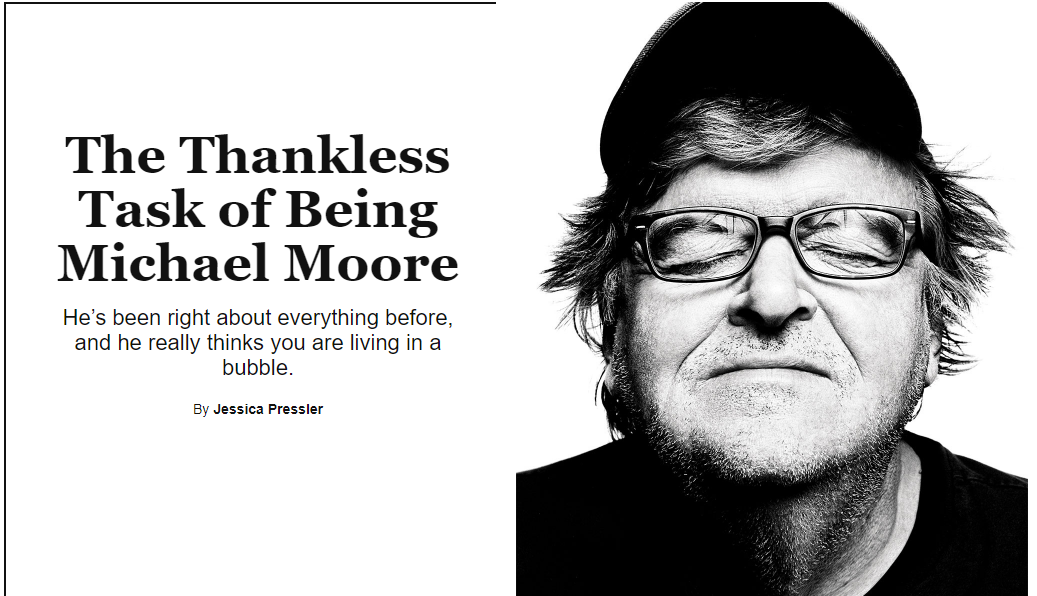 Why is this villainizing coming now? Well, Trump won’t be impeached, at least according to Moore, who apparently is right about everything. “He’s such a malignant narcissist that he’ll never resign or take the fall for his kids or his close friends or associates.” The prophet has spoken.

Moore has been well-known for political insanity. This latest story followed him during the premiere of his Broadway show, The Terms of My Surrender, which Jessica Pressler described as a “feel-good indignation inspiring romp in which Moore shares stories about his life, his thoughts about Donald Trump, and the name of a handy app you can use to call your representatives to rail about Republicans.”

Moore apparently doesn’t deal with negative reviews of his show, which have been many. “I don’t live in a bubble,” he told Pressler. Rather, he suggested that any criticisms are fake news. “Literally nobody has that reaction leaving the theater,” he stated.

Pressler seemed mostly concerned with the idea that the leftist elite, referred to as “They” in her story, have rejected Moore. “You would think … that They would realize maybe Michael Moore is a few steps ahead. But They don’t. They never have.”

This seems somewhat unnecessary, since They--including actors and actresses like Mark Ruffalo and Olivia Wilde--hero-worshipped Moore enough to follow him in a protest at Trump Tower on August 15. But apparently this doesn’t count. “He tries to do the right thing, he tries to do the most good he can, and They say no,” Pressler continues.

But even Moore is willing to overlook his millionaire status: “the way I look at it, it’s because I don’t come from money,” he told Pressler, explaining his success. Yes, with $50 million in the bank, he’s a real “surrogate for Middle America and the working class,” as Pressler put it.