Money walks, talks, and screams. At a protest, naturally, it should scream louder. So it should come as no surprise that some of Donald Trump’s famous (and wealthy) opponents went on a loud chanting protest in front of the Trump Tower on August 15, led by everyone’s favorite wealthy protester, director Michael Moore.

After the showing of Moore’s Broadway play The Terms of My Surrender (but only after -- remember, Moore needs that paycheck!) a lot of celebrities joined Moore on a protest at the Trump Tower. The protesters (and the audience) included Mark Ruffalo, Harvey Weinstein, Marisa Tomei, Olivia Wilde, and Zoe Kazan. 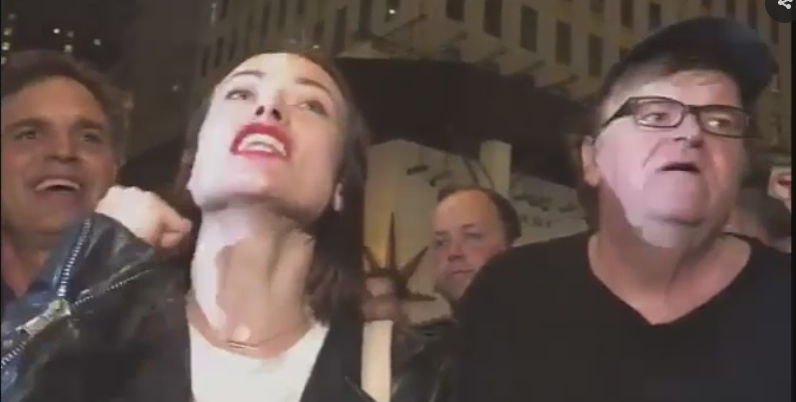 Among the chants of “Hey hey, ho ho, Donald Trump has got to go!”, Moore kicked off the protest with the statement, “There’s Trump Tower everybody! And he’s in there right now! We are here to perform a citizen’s arrest!”

According to the Hollywood Reporter, the protest was also “a candlelight vigil for Charlottesville victim Heather Heyer.” But there was an awful lot of screaming and chanting for the protest to be a vigil as well.

Egged on by the other protesters, actress Olivia Wilde screamed: “Donald Trump is not a legitimate president!”

Ruffalo and Moore led the chants, “No Trump! No KKK! No Fascist USA!” Hundreds joined the protest. In addition, Mark Ruffalo thanked Moore for “his years of service and sacrifice.” Yes, so much sacrifice that Moore now has a net worth of $50 million.