ESPN’s Bomani Jones really wants you to know that his T-shirt is clean, and powerful. Bomani Jones wore a ‘Caucasians’ t-shirt after his appearance on Mike & Mike last week. A shirt basically identical to a Cleveland Indians shirt, complete with Chief Wahoo, except it says, ‘Caucasians’ and has a dollar sign in place of a feather.

USA Today found it awesome, and even included it in a video of the post-show interview: 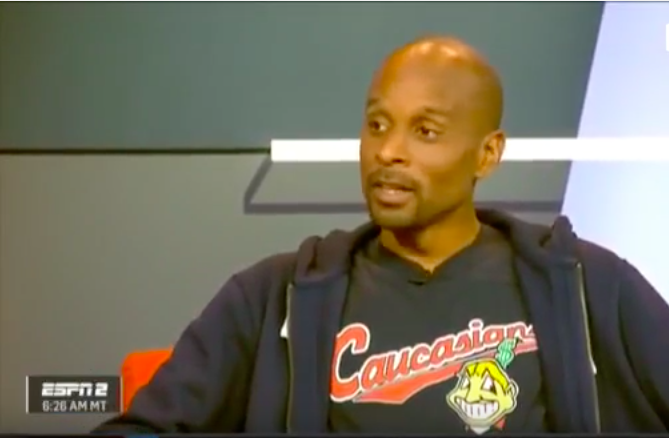 “ESPN’s Bomani Jones appeared in an extra segment following his time on Mike and Mike on Thursday morning to explain his t-shirt that read ‘Caucasian’. The shirt drew attention for the statement it makes about the Cleveland Indians’ mascot.”

After the video, the article continued:

Jones also spoke about other Native American-based mascots in sports:

“The tomahawk on the Braves jersey — I grew up rooting for that team. There’s no defense for doing that. Like the Indians logo. There’s no defense for doing that… Why would you make these people a mascot? Well, it’s based on the stereotypes we’ve had of them in the past. What would be the justification for keeping them — or the need. And then Washington, where it’s just a slur — a flat-out slur.”

It’s hard to argue against any of those points.

Of course, Jones didn’t really have to “defend himself.” It’s not like it was an adversarial interview. Not only that, it’s not like anyone is really offended by the Caucasians t-shirt.

According to Brian Kirby of Shelf Life clothing, who produces the shirt, “the ‘Caucasians’ shirt has been his most popular seller since he began making them in 2007…” With plenty of palefaces among those who are buying up the shirts.

So, in other words, Bomani Jones’ stunt backfired. He wore the shirt to provoke anger on the part of white people by flipping the tables and exposing them as hypocrites for being offended by ‘Caucasians,’ while they cheer for the Redskins, Chief Wahoo, the Braves, and so on.

Except very few, if any, white people are offended by the shirt. Proving the opposite of Jones’ point. And that maybe, just maybe, it’s time for race hucksters like Bomani Jones to get a life.