Allow me to introduce ESPN race huckster Bomani Jones. Who, in an interview with Dan Steinberg of the Washington Post, and again in a radio interview with ESPN 980 in Washington, D.C. made a point of “asking the question” (which is the leftist sports media’s preferred cowardly method for alleging racism without actually having to do it) of whether or not white Redskins QB Kirk Cousins and black Redskins QB Robert Griffin III have been treated differently by the Redskins staff and D.C. sports media, because of race. 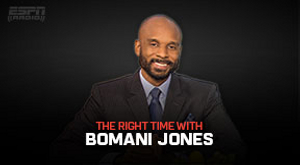 Specifically, Jones made mention of a featured Washington Post story that ran on Cousins after he was named the starting quarterback. The idea that Jones would accuse the same WaPo of racism in favor of whites, considering that this is the same paper that practically led the charge in helping to destroy the Senatorial and possibly Presidential aspirations of white Republican George Allen after he called a Democrat field operative from the Webb campaign “Macaca,” is more than a little bizarre.

But again, this is ESPN we’re talking about.

Now allow me to introduce ESPN 980’s Thom Loverro and Kevin Sheehan, local D.C. sportscasters who, in a rare act of media pushback against shameless race-mongering, let fly with one of the greatest rants you’ll ever hear against Jones and the insanity of believing the different treatment Cousins receives is due to race.

Loverro got it started:

“I only have 38 years as a professional journalist, so maybe I can speak to this,” he began. “I can’t think of anything I’ve come across in this job that’s made me more angry than this. I’m just incensed at this notion that the D.C. media is somehow racially biased in their coverage of the quarterbacks of the Washington Redskins. I mean, this is such pathetic, despicable, disgusting hate-mongering poison that’s put out there by people, and they do it so quickly, like it doesn’t mean anything: ‘Yeah, that’s it, they’re racially biased.’

Hear! Hear! But that wasn’t the end of it. Without disagreeing that there is a difference in the way Cousins is treated as opposed to RGIII, Kevin Sheehan laid bare, the real truth of the matter:

“…let’s just go to the personal feelings that people have about Griffin and Cousins. Cousins hasn’t made any of the following comments to my knowledge, comments like ‘I know I’m the best quarterback on this team,’ ‘I feel like I’m the best quarterback in the league.’ Back in 2013: ‘He [Mike Shanahan] better live up to his promise and play me if I’m ready.’ How about before 2014, ‘Now we get to do what we want to do #TheMovement.’

“He hasn’t come out, to my knowledge, with seasonal marketing slogans. Maybe he will. He just hasn’t done it yet. Slogans like ‘All in for week one,’ ‘Talk small play big,’ ‘Know your why,’ ‘The grind and find.’ To date, he hasn’t had his family criticizing the organization over the playbook. To date — and this could change — he has not walked into the coach’s office with demands that 19 plays be stricken from the playbook. As of today, he has not yet produced a documentary entitled ‘The Will to Win.’

“We can talk about all these things as a big deal or a small deal, and that’s totally open for debate, but it’s hard to debate that it doesn’t influence how you feel about someone, especially if that someone doesn’t back it up on the field with results. And therein lies the biggest difference in the coverage of Cousins vs. Griffin, which we both admit is different, but not based on race.”

And there you have it. Sheehan and Loverro could have just as easily “asked the question” on whether or not race was the reason for the difference in treatment between Cousins and Griffin. The same way Bomani Jones did, based on nothing other than the fact that one is black and one is white.

But since both Sheehan and Loverro are actually both real journalists and serious analysts who, unlike Bomani Jones, are actually concerned with the real meaning and purpose of what the media is supposed to do, they were both willing to look beyond the superficial and the sensationalism and ponder the other, painfully obvious factual differences between Cousins and Griffin.

And in so doing, they were able to present their audience the truth.

It is a rare thing when truth triumphs over noise in today’s media, sports or otherwise. It did here.