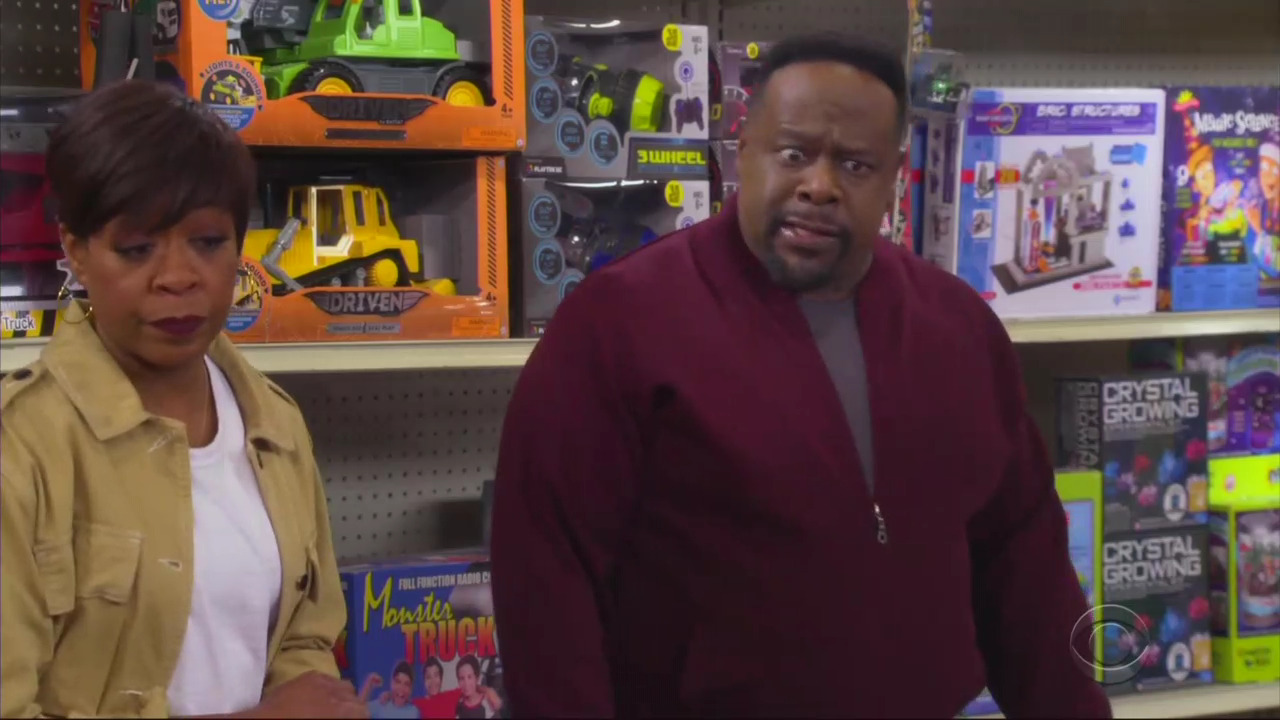 Monday night, CBS's The Neighborhood returned from its winter hiatus pulling off its political correctness stunts once again. In this episode, titled “Welcome to Grover’s Birthday,” Tina (Tichina Arnold) and Calvin Butler (Cedric the Entertainer) are invited to Grover Johnson’s (Hank Greenspan) birthday party. Finding him a present proves to be challenging, however, when Gemma Johnson (Beth Behrs) gives certain outrageous stipulations.

Calvin: Look, we'll just find a birthday present for Grover and go. (Laughs): Oh! How about these nunchucks? (Shouting) Oh, you know he's gonna hit Dave with these.

Tina: Put them back, Bruce Leroy. Gemma doesn't want us to get him any violent toys.

Tina: No. Gemma asked us to shy away from any toys that reinforce specific genders.

Calvin: Well, God forbid Grover finds out he's a boy. How about we just cruise over to the food section and get him a can of soup? (Chuckles)

Tina: Gemma suggested that we get him something educational.

Calvin: Well, we can get him some alphabet soup.

Tina: Ooh, this is nice. A math puzzle.

Calvin: Seriously? What did that boy ever do to you? You know what? I-I really can't believe how these parents coddle their kids nowadays. MM. We gave Malcolm and Marty plenty of violent, gendered toys and they turned out fine.

Malcolm: (Laughter, shouting) Come on, you're dead, man! I knocked your head off.

Marty: No, you missed. You hit that old lady! (Both grunting)

Calvin: You know what? I'm gonna let you deal with this. I'm gonna go back and get some more toothpick weenies.

As Calvin concludes, it's impossible to get Grover a real gift while conforming to Gemma's ridiculous rules. Afterall, a case can be made that almost any toy now-a-days can be violent and used as a weapon. And then there's the gender reinforcing toys--even the math puzzle could be problematic because there's a stereotype that boys are better at math. And while so-called gendered toys are frowned upon, I'll bet that toys that go against traditional gender roles are encouraged.

The left is making it harder and harder to conform with their politically correct policies because they're constantly changing and go against generations of experience and observation. How about we just let kids be kids, not subjects of leftist social engineering experiments.