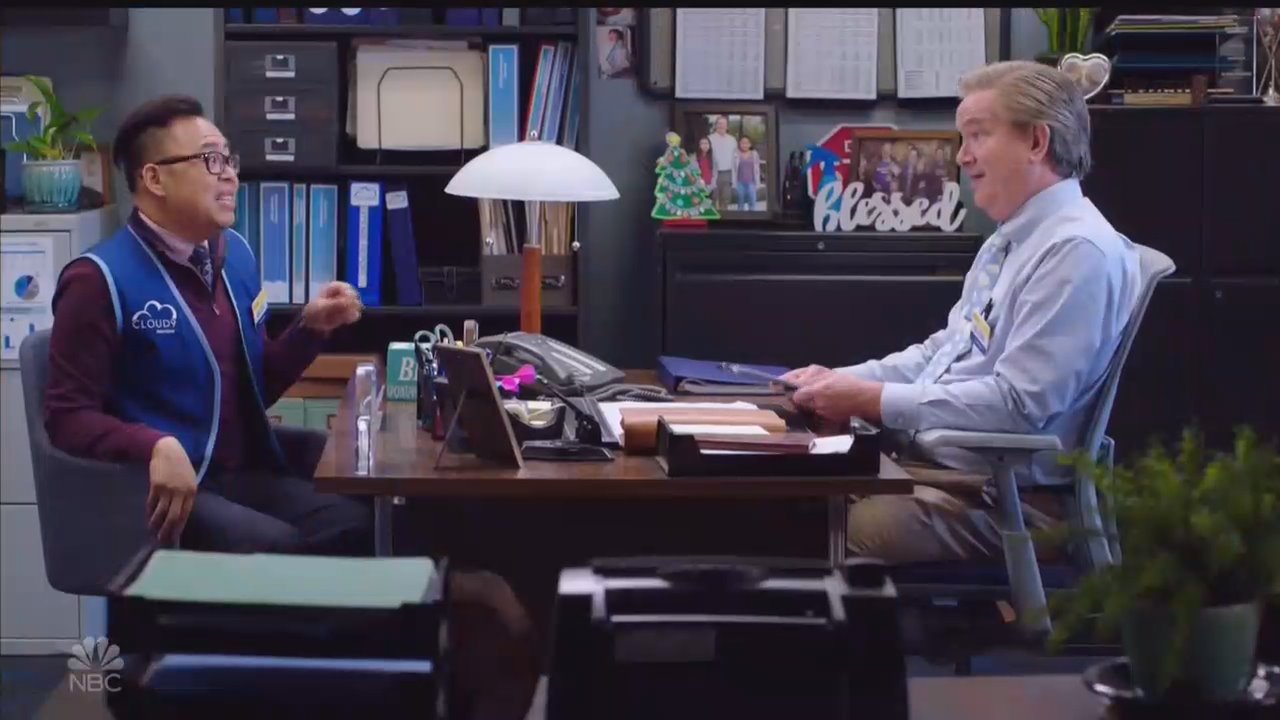 Thursday night, NBC's Superstore proved to us once again that they are super liberal with an illegal immigration plotline. Did I say illegal? Excuse me for not using the politically correct term “undocumented” that was littered throughout the episode as part of an effort to make it seem less wrong.

In the episode "Managers' Conference," Mateo (Nico Santos), a Filipino, begins to worry his illegal status will be found out when Cloud 9 store manager Glenn (Mark Mckinney) begins running all the employees through e-verify.

When one worker confuses e-verify with the sex offender registry, the show is quick to make the point that "it's not illegal to hire a sex offender, but it is illegal to hire an undocumented immigrant." Then, a discussion about Sayid (Amir  M. Karingy) fleeing the civil war in Syria turns into the proclamation that only bad people think the American Civil War wasn't about slavery.

Glenn: Hey guys. Coorporate is asking us to run everyone through e-verify and uh there's a bit of a problem.
Cheyenne: What? What's e-verify?
Marcus: It's a registry for sex offenders.
Dina: No, it's for undocumented immigrants.
Marcus: Why not sex offenders?
Dina: Because it's not illegal to hire a sex offender, but it is illegal to hire an undocumented immigrant.
Cheyenne: Well, I've heard that e-verify is full of bugs. Just lots and lots of bugs.
Glenn: They're not bugs, Cheyenne. They're human beings. But we do need to talk.
Mateo: Me? Or Sayid? You probably meant Sayid. Sayid, Glenn wants to talk to you.
Glenn: Yeah, I meant Sayid.
Mateo: Good. That's what I said. Yeah. We're all saying the same thing. Sayid, I think you're getting deported.
Sayid: But I'm not undocumented.
Mateo: Of course you're not.
Dina: He's a refugee. You have to enter his info on a different page.
Glenn: A refugee? Oh, I had no idea.
Marcus: So, what crime did you commit?
Sayid: I committed no crime.
Marcus: Then why are you on the run?
Sayid: I'm a refugee, not a fugitive. I was fleeing the civil war in Syria.
Cheyenne: Whoa, what was Syria like?
Sayid: Not good. Seriously, not good.
Glenn: Yeah, there's all sorts of, like, rampant destruction and beheadings and locusts, right?
Sayid: Yes, though the locusts had nothing to do with the war. They're a seasonal nuisance.
Dina: Hey, what are your thoughts on the movie, "Syriana"?
Sayid: I thought George Clooney was pretty okay, and Matt Damon was just okay.
Cheyenne: Did you own slaves?
Glenn: Cheyenne, why would you ask that?
Cheyenne: He said he was part of a civil war. Our Civil War was about slavery.
Marcus: Actually, the Civil War was not about slavery. That's a misconception.
Garrett: No, not a misconception.
Marcus: Good people can disagree.
Garrett: Wrong. You are not a good person if you disagree.
Glenn: The point is, Sayid, you're home now. And on behalf of everyone in America, we welcome you.
[Light applause] Come on, clap harder. He's been through stuff.

All seems to be well for Mateo after the meeting, until he worries that Sayid overheard a conversation in which he admitted to being “undocumented.” Mateo and Cheyenne (Nichole Bloom) spend the rest of the shift doing “damage control.” They make up absurd claims including that Sayid is supposedly a liar per his culture and inventing the phrase "Lying like a Syrian."

To Mateo’s dismay, however, he is soon found out by Glenn and it is revealed that he's stolen the identity of a woman in Buffalo.

Glenn: Mateo, Sayid seems to think that you're undocumented and that you've been working in this store illegally.

Mateo: What? That--that's crazy. Why would he...wait, is today November 29th?

Glenn: Okay, I didn't believe him at first, so I checked. Did you know that your social security number belongs to a Polish woman from Buffalo? So, unless your name is Nadia Kedzierski, we have a problem.

Glenn: Oh, okay. Well, I'm relieved to hear that. So, if you could just enter your real one.

Mateo: I don't think you're supposed to give out--

After Mateo gives Glenn an obviously fake "corrected" social security number he prepares for the inevitable--being deported. In a not-so-shocking twist, however, Glenn tells Mateo that his social security number “checked out.” What it really means, though, is that Glenn has decided to overlook his illegal status as he wishes Mateo a Merry Christmas.

Somehow we are supposed to see this as a charitable and heroic move at Christmastime--only they’re, uh, you know, breaking the law and perpetuating all the enforcement problems that have led to the broken immigration system we have today.