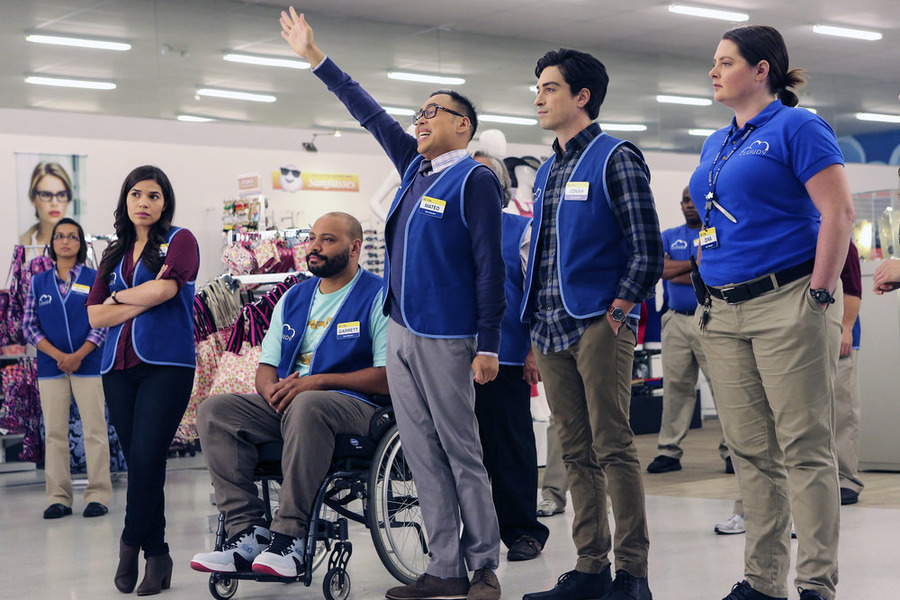 NBC’s Superstore wanted to make a "progressive" statement about illegal immigration, but went WAY over the line - complete with comparisons to Nazi Germany and "Heil Hitler" salutes.

In Thursday's episode titled “Mateo’s Last Day,” Cloud 9 store employee Mateo (Nico Santos) is being transferred to a Cloud 9 Signature store, a promotion that will alleviate the inconvenient employee fraternization conflict with him and his boyfriend, District Director Jeff (Michael Bunin). The relationship can continue and corporate will be happy to avoid any human resources headaches.

The bad news is that Mateo is an illegal alien working in America without a Social Security card. In order to distract Jeff from asking for his Social Security card to complete the paperwork of the transfer, Mateo makes a disgusting statement to Jeff - “I didn’t realize this store was like Nazi Germany” - and mocks him, goose-stepping and saluting like a Nazi.

Jeff: Hey, there you are.

Jeff:  Got your transfer paperwork right here. So just go ahead and fill that out and get it turned in to me with your Social Security card and we're good to go.

Mateo:  Cool. Um, I-I can actually just give you the number.

Jeff:  Uh, no, they actually need to see the card these days. They gotta run it through e-verify. Is that gonna be a problem?

Mateo:  No, no, no. No, I just didn't realize this store was like Nazi Germany. Ve must see your documents. Heil Hitler, Mein Fuhrer.

How sick is that dialogue? The District Director was doing his job and collecting the proper documents to use the government’s system – e-verify – to make sure that employees are working in America legally.

Mateo is a coward. Fearing deportation once he comes clean with Jeff, he ticks off various quick solutions to become legal out loud with Cheyenne (Nichole Bloom) and Jonah (Ben Feldman). He’s not a refugee, he isn’t married to an American citizen – and then Jonah comes forward with the suggestion that Mateo and he marry for Mateo’s green card. Mateo wasn’t ok with that suggestion, fortunately. He actually said to Jonah, “Ew.” Then a special U.N. exception came forth – a victim of violent crime can be eligible for a green card. Jonah replies, “That’s crazy. I can’t believe that’s real.” I couldn’t believe it either, so I looked it up. Turns out, it’s a real thing, and Mateo tries to get somebody in the store to beat him up.

Anyway, in the end, Mateo decides to end the relationship with Jeff and stay in his current store instead of telling Jeff, and corporate, the truth. It’s a lame conclusion that leaves the question dangling out there – how did Mateo get the job he has now in the first place?

The show’s star, America Ferrera who plays Amy, was interviewed about getting her debut as a director in this episode. She is a vocal political activist for the usual liberal causes, including speaking recently at the Women’s March on Washington. She says she thought she had to choose between art and activism but it looks like to me that she didn’t choose at all, instead she just combines the two. That’s today’s Hollywood for you.