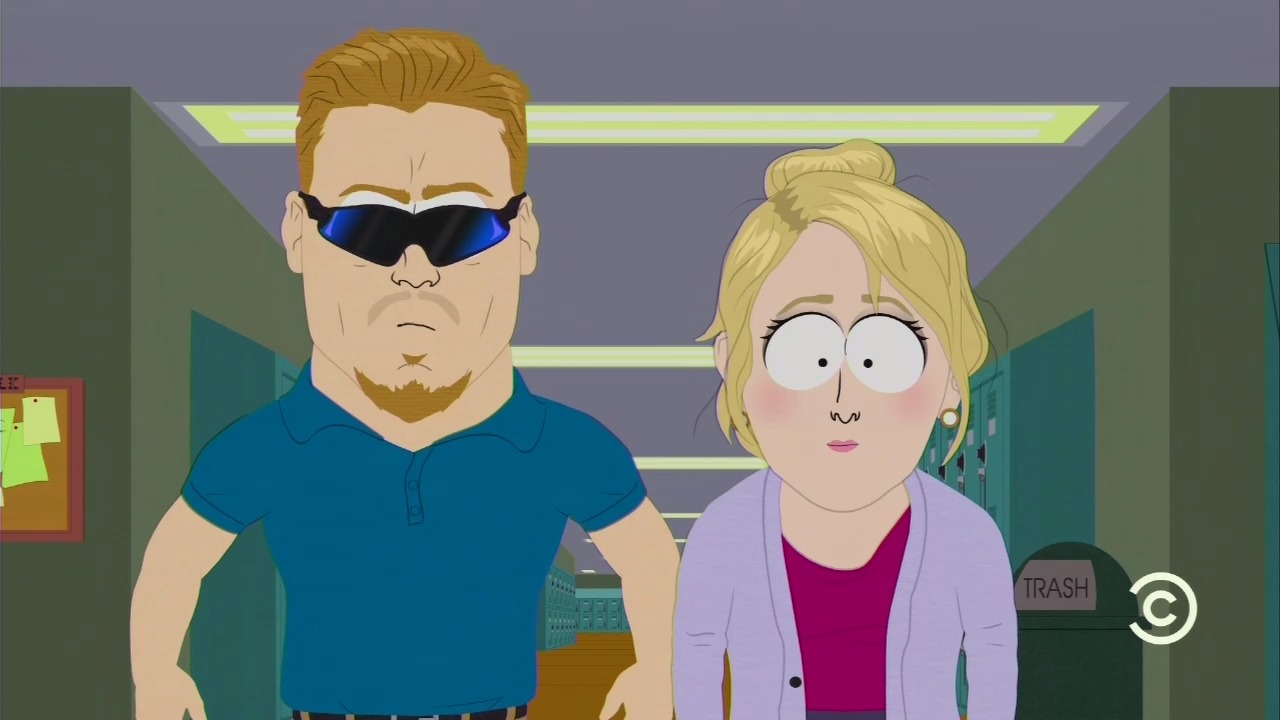 Things are changing at South Park Elementary School and when PC Principal gets a new Vice Principal named Strong Woman, the last thing he expects is to have feelings for her. A PC man can't possibly have feelings for a co-worker, that would be inappropriate!

Still, he can't help but hear Hootie & the Blowfish music every time she's around in the November 30 episode "Super Hard PCness." He goes to a doctor about the sound of "Hold My Hand" by Hootie & the Blowfish in his ears, but the doctor confirms that he just has feelings for the vice principal. "We work in the same place, so it'd be impossible for me to like her," PC Principal insists.

PC Principal asks the school counselor, Mr. Mackey, if he happens to know if Vice Principal Woman has a boyfriend, and Mr. Mackey responds, "Are you out of your [bleep] mind?! Askin' if a co-worker is available in today's times?!" Mr. Mackey decides they need to get human resources involved to do a workshop immediately.

Meanwhile, Kyle has decided that, while he used to find the Canadian television show "Terrance and Phillip" funny, as he gets older, he finds their flatulence-based humor to be offensive. To combat the show, he founds the organization "Millennials Against Canada." In retaliation, Canada asks the President of the United States (Mr. Garrison, as a thinly-veiled caricature of Trump) to keep his millennial population in check because, it's explained, "Terrance and Phillip are Canada's largest export." He responds, "Look, I'm president of the United States. I can't get involved in every petty little protest against a third world country." HA.

Back at the school, human resources sends Heather Conduct down to speak with the staff, and Mr. Mackey and Miss Conduct feel some chemistry, too. While they try and fail to do a role-playing exercise on how not to flirt at work, alarms go off in the school. There's a military alert - the staff needs to find out what's going on and get kids to safety.

When PC Principal and Vice Principal Woman go to check on the kids in this emergency situation, there's an unexpected complication: a door urgently needs to be opened, but first they have to stop to have a conversation about the gender bias implied in who opens the door.

Unfortunately, this kind of "issue" is actually something men have to worry about these days around certain feminists. Some woman consider what most see as basic manners as sexist, disrespectful or, as one feminist put it, an attempt to "deny women their agency."

No, it's not that men think we can't open a door, they're just being nice. In this case, there's a military incident at play, and somebody has to do it. It's literally a matter of life or death, because the United States has just hit Canada with a nuclear weapon and the kids of South Park Elementary need to be taken to safety.

Still, PC Principal has to stop to discuss the issue with Vice Principal Woman first, because nothing can just be simple in the world of political correctness. Not even opening a door.