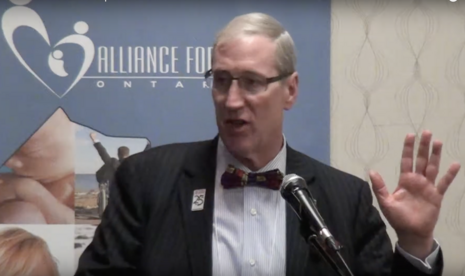 Continuing the left’s mission to hound all conservatives out of public life, The Washington Post launched an attack on a prominent pro-life doctor on September 10.

The article itself, while clearly intended as a hit piece, mostly missed its mark and turned out to be reasonably fair considering the source. Judging from Kitchener’s tweets, which betray her pro-abortion bias, this is possibly due to a skilled editor who may have toned down her more strident language.

Approximately 4,500 doctors are members of the American Association of Pro-Life Obstetricians and Gynecologists, an organization Calhoun led as president from 2000 to 2006. When doctors consult on fetal abnormalities and high-risk pregnancies, their conversations can alter the course of their patients’ lives. And while doctors who choose not to discuss abortion aren’t breaking any laws, they are violating guidance widely accepted by the OB/GYN community.

According to the American College of Obstetricians and Gynecologists (ACOG), the 60,000-member professional organization for OB/GYNs to which Calhoun belongs, the “standard of care” is for doctors to raise abortion as an option if they have reason to think their patient might be unsure about a pregnancy. This includes any case with a severe fetal abnormality or any high-risk case, when pregnancy complications “may be so severe that abortion is the only measure to preserve a woman’s health or save her life.” …

When Kitchener tweeted, it became:

The American Association of Pro-Life Obstetricians and Gynecologists is an organization with over 4,500 members. These doctors are alone in consultation rooms with pregnant patients and their families. What they choose to say, or not say, can alter the course of someone’s life.

The tweet is far more pointed, you can imagine Kitchener aghast at the idea of pro-life doctors being allowed to be ALONE with their patients. How about some thought for the fact that abortionists who stand to financially again from the decision to abort are alone in consultation rooms with pregnant women. What they say or don’t say can END someone’s life.

As a high-risk doc, Calhoun (past president of AAPLOG) counsels patients who are more likely than most to need an abortion. He believes abortion is never necessary to save a mother's life. I spoke to 6 doctors and 3 patients who say he doesn't talk about abortion as an option.

This flies in the face of OB/GYN industry guidance. If a doctor has any reason to believe a patient is unsure about their pregnancy, or in any high-risk case, they are expected to counsel a patient on all of their options. But there is no oversight to make sure this happens.

There is no such thing as a “need” for abortion and Dr. Calhoun is not the only physician who says abortion is never necessary to save a mother’s life. She also softened the guidance from ACOG, which is pro-abortion, from doctors directly raising abortion if there’s any uncertainty to the more euphemistic phrase “all of their options.” As if abortion is an equally valid choice among others.

Significantly, in the two years Kitchener spent working on this article, she couldn’t find a patient of Dr. Calhoun’s to speak against him. She had to bring in pro-abortion medical workers years later to second guess the care his patients say they were “happy” to receive.

She summed this up in two tweets:

In WV, one of the most antiabortion states, many patients praised Calhoun's care. I interviewed women whose babies had fatal diagnoses, and who were thrilled to find a doctor who promised to fight for them. Abortion was never mentioned, they said. And they were glad.

Doctors I interviewed pointed out the mental and physical health risks posed by this counseling. Calhoun offered “false hope,” they said, when faced with fetal conditions that were certainly fatal. One said, “There is an emotional cost to prolonging something that is inevitable.”

Of course, there's a greater mental and emotional cost to aborting a wanted baby, which is something Dr. Calhoun understands well. He pioneered perinatal hospice care, which provides support for the family of an unborn infant with a fatal prognosis, allowing them the time and resources to be with their child after they’re born so they get some closure and can grieve.

To her credit, Kitchener reported, “Perinatal hospice services are now offered by approximately 250 U.S. hospitals, medical centers and hospice facilities, and more than 70 around the world,” but oddly that astoundingly popular, life-affirming program was not highlighted in her story tweets.

Judging from the multiple quotes from the university Dr. Calhoun works at pledging their commitment to free speech and allowing private beliefs, Kitchener attempted to pressure them into disavowing the OB/GYN. No doubt her article will put increased scrutiny on him and could even lead to witch hunt-like investigations. What a coup it would be to take down the only high-risk OB/GYN in central West Virginia for being pro-life … except for women with high-risk pregnancies in central West Virginia.