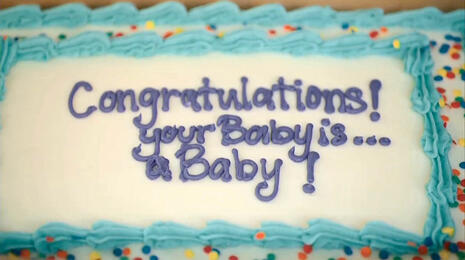 Perhaps unsurprisingly for a semi-biographical show about Abby McEnany, “a 45-year-old self-identified fat, queer dyke,” Showtime’s Work in Progress pushes the nonsense that gender is a spectrum in the September 5 episode. That attitude is sadly shared by Abby’s 10-year-old nephew, Matty (Kenny Rasmussen), who is being taught the same baloney in school.

In the episode, titled “Take Your Child to Work Day,” Abby brings Matty along to pick up the cake for a party for her boss, Susan (Mary Sohn), who is pregnant thanks to a sperm donor--her gay best friend, Rick. Abby reveals to her nephew that she complained about the office party being hailed as a “gender reveal party,” so they had to change it. She seems to be quite proud about it, too. As it turns out, Matty is already right on board:

Matty: I can't believe you get to have parties at your office.

Abby: In theory, you are correct.

Matty: Is it someone's birthday today?

Abby: No. Actually, my boss is pregnant and she wanted to have a "Gender is a spectrum" reveal party.

Matty: What are they revealing?

Abby: That my boss is an exhausting human being. It was originally gonna be a gender reveal party, but it got changed after an anonymous complaint to HR.

Matty: Why do people do those kind of things? I mean, what if the baby is intersex?

Matty: Or they might have an extra chromosome or something. You wouldn't even know about it until much later. I learned that in biology.

Understandably, at the party, Susan ultimately can’t help revealing that she is having a girl, but is forced to amend her statements once Abby throws a fit and makes it all about herself:

Susan: Now, I know that some of you might think that this party is a little over the top, but I just wanna thank you all so much for supporting me through this amazing journey. I really appreciate working at a place where people accept you for who you are, because, folks, we are knowledge workers. And what matters is knowledge. I think that deserves a round of applause. [Light applause] Oh, I can't wait to meet this baby! Which is a... Girl.

Abby: Susan, you just revealed the gender of your baby. This is now a gender reveal party.

Abby: What do you mean, you didn't mean to?

Susan: The doctor wasn't gonna say anything but then it was such an obvious vagina.

Abby: You went back on your word. You are locking your child in a heteronormative BS that ruins lives, Susan. I thought you heard me.

Susan: Abby, she could change later. Hey, everyone, my baby's starting out as a girl but then she can be whatever she wants later, okay?

Abby: This is a betrayal.

Rick: What else are you keeping from me? Did you pick a name? Oh, you did. I told you, I have a toxic Aunt Tiffany.

Susan: Abby, can we please just have a calm, relaxing party?

Abby: Susan, clearly, we can't! You got live string music. Presents? You make the most money of anybody here!

Further mayhem breaks loose due to issues with sparklers, a delayed balloon drop, and knocked over furniture which nearly causes Abby to have one of her severe panic attacks. Yet she gets it together and saves the day by taking charge of evacuating people from the office after it becomes a fire emergency. She even gives her co-workers a rousing speech.

Not surprisingly, most of Abby’s friends are part of the LGBT community. The show has involved consenting adults making adult decisions, such as to transition or attend a Drag Queen fashion show/reading hour event. That is, until now, with the show pushing gender ideology on a minor, who is Abby’s impressionable nephew no less. If it's this bad now, I can only imagine what Susan's baby will be taught as she grows up.