Woke Side Story: Rita Moreno Apologizes for Being ‘Dismissive of Black Lives’ 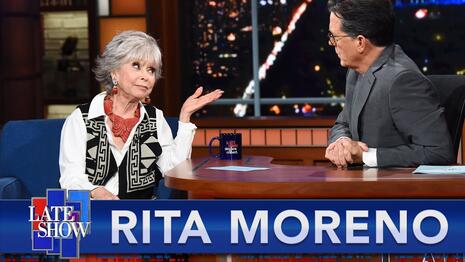 Legendary performer Rita Moreno was forced to bow to the woke crowd for defending Lin-Manuel Miranda’s new movie from charges of “colorism.” Yes, the racial bean counters have resorted to keep tabs on the proper variety of skin color shades.

In the Heights is the film adaptation of the Broadway musical by Miranda of the same title and it tells the story of a Latino community in New York City. But, after a video from The Root went viral over the weekend challenging the director and some actors on the claim that “In the Heights privileges white-passing and light-skinned Latinx people,” Miranda responded on Twitter with a groveling apology.

“I’m learning from the feedback, I thank you for raising it, and I’m listening,” he said, in part. “Thanks for your honest feedback. I promise to do better in my future projects, and I’m dedicated to the learning and evolving we all have to do to make sure we are honoring our diverse and vibrant community.”

Miranda is an executive producer of the new documentary Rita Moreno: Just A Girl Who Decided To Go For It, which will be released on Friday, and Moreno was on The Late Show With Stephen Colbert to promote it. That’s when the West Side Story actress stepped in it, defending her friend.

On Tuesday night’s episode of The Late Show, the almost 90-year-old actress declared that “the criticism about Lin-Manuel… upsets me.”

“You can never do right, it seems. This is the man who literally brought Latino-ness and Puerto Rico-ness to America,” she went on, upset that the criticism over skin tone was overshadowing a great achievement by the Puerto Rican-American entertainer.

“Well, I'm simply saying, can't you just wait a while and leave it alone? There's a lot of people who are puertorriqueno, who are also from Guatemala, who are dark and who are also fair. We are all colors in Puerto Rico. And this is how it is. And I just-- it would be so nice if they hadn't come up with that and left it alone just for now. They're really-- they're really attacking the wrong person.”

Well, predictably, this set off the Twitter SJWs who couldn’t just leave it well enough alone and by Wednesday evening the EGOT winner had to issue a mea culpa:

“I’m incredibly disappointed with myself. While making a statement in defense of Lin Manuel Miranda on the Colbert Show last night, I was clearly dismissive of black lives that matter in our Latin community. It is so easy to forget how celebration for some is lament for others. In addition to applauding Lin for his wonderful movie version of In the Heights, let me add my appreciation for his sensitivity and resolve to be more inclusive of the Afro-Latino community going forward. See, you CAN teach this old dog new tricks.”

Apparently, that trick is “roll over.”