Med Drama Celebrates Polyamory as ‘Love’ and ‘Freedom,’ Condemns US for ‘Imperialist Crimes’ 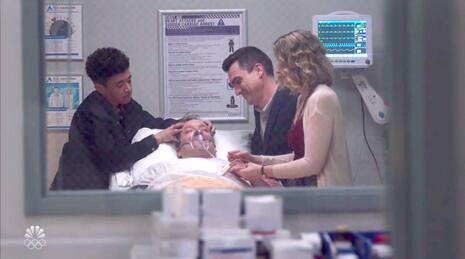 When it comes to love, sex and social justice, anything goes on NBC’s New Amsterdam.

In Tuesday's episode “Radical,” a patient named Niall arrives with his girlfriend. Soon two more people arrive who identify themselves as his boyfriend. While Dr. Floyd Reynolds (Jocko Sims) and Dr. Lauren Bloom (Janet Montgomery) are treating the patient they have a conversation about the polyamorous “quad.” When Reynolds seems slightly uncomfortable about it, Bloom tells him, “Don’t be such a square.”

“There is no way that I could share my person with someone else,” he tells her later. “It just seems wrong to me, like, morally.” Again, Bloom dismisses his values saying, “Morally? Ok, not every relationship has to look like yours and Evie's.”

Later, they are forced to bring in Niall’s wife, Maggie — who had previously left him “when he came out as bi” — because she’s the only one who can legally consent to treatment he needs. After Niall is successfully treated, he tells Reynolds he still loves his wife but says of his other sexual partners, “Oh, God, they won’t be happy.”

Reynolds: Well, I thought polyamory was all about freedom. Letting people be themselves.

Niall: You know, I spent years putting labels on myself: monogamous, polyamorous, bisexual.  But now, I want those three beautiful beings out there. And I want Maggie. I can't apologize for that, but I also can't find a label for it.

Reynolds: And you feel like you need a label to explain what you want?

Niall: It's terrifying to ask for something when you can't put a name to it, but there you go. I'm a greedy bastard. I want them all. I love them all. Just don't know what to tell them.

Reynolds: I think you tell them that.

In the same episode, Bloom discovers that her roommate Leyla likes her when she kisses her. Bloom quickly leaves for work. While the initial kiss took her by “surprise,” Bloom describes it later that night as feeling “normal” and “real” and she kisses Leyla back. This is a clear and sudden shift from Bloom’s past heterosexual behavior to lesbianism, bisexuality or even the new trendy pansexuality.

This time, Max is trying to save a Lenape Native American patient. But Professor Jane Munsee refuses treatment for a dangerous blood clot that could kill her unless Max “can make up for 400 years of crimes against Native Americans.” She insists the very name of the hospital, New Amsterdam, the Dutch name for their settlement on Manhattan Island, was “celebrating the destruction of indigenous lives.”

Nurse: It would go a lot better if she weren't demanding to be discharged.

Nurse: Something about imperialist crimes against Native Americans.

Max: Oh, that. Professor Munsee, I am Max Goodwin, the medical director.

Jane: Nice to meet you. Please sign this so I can go.

Max: Well, uh, the thing is you have a pretty sizeable blood clot in your leg and standing or walking or moving of any kind could cause that blood clot to break free and travel to your lungs, and we need you on a heparin drip now and here at New Amsterdam.

Jane: Those two words, Doctor, are exactly why I need to leave.

Jane: You know what New Amsterdam means to me? Death, lies, the erasure of my people.

Max: I see. You mean when the Dutch colonized Manhattan.

Jane: Before this land was New Amsterdam, it was Lenapehoking... The home of the Lenape people, my ancestors. We were here long before the Dutch. As long as the name New Amsterdam is emblazoned on this building, you're accepting, even celebrating the destruction of indigenous lives.

Max: Okay. I hear you. You don't want to stay here, but right now you have a ticking time bomb in your veins. You need this heparin drip, or you could die.

Jane: So tell you what, if you think you can make up for 400 years of crimes against Native Americans, I'll stay here at New Amsterdam.

First, he tries and fails to rename the hospital “Lenapehoking.” Then he incites a protest to force the board to recognize the city’s “imperialist crimes” by naming the lobby for the Lenape people. Lastly, after failing to find any Native American doctors at the hospital, he comes up with the idea for a shadowing and scholarship program for Native American students to help them go into medicine.

All this, combined with another side plot with the message that "being fat is okay," made this particular episode of New Amsterdam so much more woke than usual that it was to the point of parody.

Conservatives Fight Back! Tell New Amsterdam's advertisers what you think of them sponsoring such inflammatory content: AT&T, Colgate, and Uber Eats.