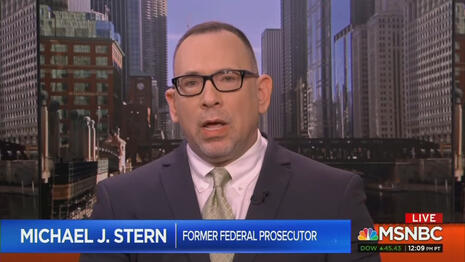 If you took a look at the USA Today op-ed pages early this week hoping to find a little reasoned perspective on the coronavirus, boy, did you go to the wrong place!

Move over, Jeffrey Dahmer and Ted Bundy! “COVID-19 has turned every man, woman and child into a potential serial killer,” according to Stern:

With alcoholism, opioid addiction or smoking, we stand a fighting chance. But COVID-19 has turned the most necessary part of living — breathing — into a deadly event. If there’s anything that can make us hate our neighbors, it is the possibility that their very existence — every breath they exhale — could be lethal.

It’s really not so much breathing as sneezing, coughing, singing or shouting that spreads the virus and it’s not very lethal to those under age 65, but he carries everything to the extreme.

So irrationally does Stern fear coronavirus, he considered the fact that he hasn’t caught it yet a “streak of good luck” that could run out at any moment and envisions becoming infected by a person in the grocery store not properly wearing a mask and “expelling a cloud of radioactive COVID dust that I cannot escape.” Well, points for imagination, but that isn’t very scientific.

But worse than the risk from strangers at the store is killer loved ones, to Stern: “Any sustained encounter with those we love — kisses, hugs, laughs, conversations — could bring fever, blood clots, fluid-filled lungs, and death.”

It won’t shock you to find out that Stern admitted to having obsessive-compulsive disorder, but I fear several undiagnosed mental maladies. His partner is a British man who works at a London hospital and Stern described their most common Skype argument: “The one sure topic of conversation is the argument that follows my head exploding as I watch him unwittingly rub his hands over his face, after spending the day in a hospital that treats COVID-19 patients.”

So, we have someone with a mental disorder lecturing a hospital employee about touching his face, as if handwashing doesn’t kill the virus. Again, follow the science, not your panic-addled brain.

At one point recently, Stern recounted how his partner had a fever and was vomiting so Stern was “certain he had COVID-19” and obsessively made plans to fly to London “to get to the hospital before he died.” Of course, it turned out to just be a stomach bug. You’d think that after that false alarm Stern would calm down a bit, but no, he worried more:

If there is a fear worse than contracting a deadly illness from someone you love, it is giving a deadly illness to someone you love. A day at work, a bus ride home or a restaurant stop to pick up a carryout dinner is only part of the daily land-mine course that risks exposure to coronavirus. Bringing that bug home to our kids, husband, wife or parents is terrifying. It has left me Googling whether holding my breath when I hug my parents will spare me the Greek tragedy of killing my own mother or father.

Stern is still scarred from the “mental toll” of the AIDS crisis for gay men in America, but then tried to over-dramatize it by citing the “tens of millions of people [who] died from AIDS-related causes worldwide,” instead of using the far less shocking but far more relevant figure of 700,000+ U.S. AIDS deaths over the course of almost 40 years.

As Stern wrote, “It messes with your mind, even when the threat is gone.” The problem is that his messed-up mind is being taken seriously in a national publication.