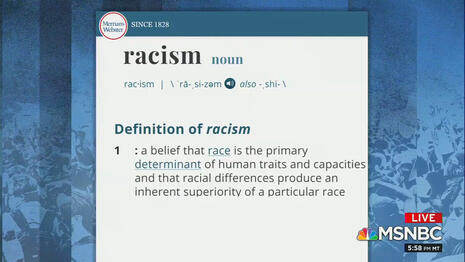 The current racial reawakening is forcing a reexamination of everything, from statues to TV shows. Of course, that also includes language.

On Thursday, Olivia Eubanks reported for ABC News on “some commonly used terms that actually have racist origins” in an article that, to be generous, at times stretched the meaning of “common” and “origin.”

According to Eubanks, some words “remain in wide use despite their racially questionable origins. That's because the definition of these words and phrases have often been lost over time, experts said.” Isn’t this a good thing? A sign that America has moved away from its racist past? No, say “experts,” it’s proof of systemic racism:

“There is racism embedded throughout our language system just like every other system," said Jeffrey Barg, a Philadelphia Inquirer columnist, known as The Angry Grammarian told ABC News. “We need to dig deeper and understand where the phrases and words we use come from because if we don’t we are being complicit in perpetuating the racist systems that are embedded in our language.”

How can we be complicit in racism if the meaning of a word or phrase has completely changed and nobody knows or endorses its original meaning? A real problem would be if we were still using them with racist intentions in mind. Turns out, it doesn’t matter:

To say these phrases and words are ‘just expressions’ or to say ‘the intent of using the word is ‘not meant to be racist’ is not good enough Barg explained.

“You have to consider how someone else feels when you use these terms.”

The article then listed and explained “some commonly used terms that actually have racist origins” based on “experts ABC News spoke with.”

The first was “open the kimono,” which was a little unclear on the origins and not that well known but either way was said to “amplify a stereotypical view of Japanese culture.” When focused on its “literal meaning,” Alan Conor, author of The Crossword Century and The Joy of Quiz, complained the phrase sounds “rude” and “predatory.” That sounds a little more #MeToo than #BLM.

The next term was “fuzzy wuzzy,” which I haven’t ever heard used except as a children’s nursery rhyme about a bear – how is this listed as a “commonly used” term? It was commonly used way back in the late 1800s and immortalized in Rudyard Kipling's 1892 poem "Fuzzy Wuzzy" which complemented “the brave actions of the Hadendoa warriors in colonial Sudan.” Only later it “became a derogatory way to refer to natural hair texture of non-white people throughout Africa,” according to the report.

Then came “plantation,” such as “(shutter, blinds, style weddings, etc...)”

The word plantation appeared in English in the 1400’s originally meaning “plant” according to [John Kelly, senior research editor at Dictionary.com]. It was not until the 1600’s that the word was defined as estates where the enslaved labored in bondage and were forced to grow such crops as cotton and tobacco.

The last part is incorrect, in the 1600s a plantation meant a new colony or settlement, such as with Plymouth Plantation or Rhode Island and Providence Plantations, the latter founded by abolitionist Roger Williams and on the ballot to be renamed this year. So, again, it’s not the origins of the word that matters, but what the word has come to be associated with more recently.

Other expressions said to have racist origins included “Off the reservation,” “Eskimo,” “peanut gallery,” “Paddy Wagon,” “(sit) Indian style,” and “Mumbo jumbo,” not many of which actually have clear racist origin stories as promised.

No matter, the speech police are on the case! The city streets may no longer be safe, but at least feelings are being protected.