Somebody came up with the perfect meme mocking how Netflix unnecessarily wedges in LGBT characters into all their shows and Netflix got mad.

A twitter user posted an image on Tuesday morning of Patrick from SpongeBob SquarePants trying to insert a huge pumpkin into a small funnel into SpongeBob’s mouth with text indicating that Patrick stood for “Netflix,” the pumpkin “an unnecessary gay character” and SpongeBob “any new series.”

But Netflix’s official twitter account objected. Wednesday night they retweeted the meme with the comment, “[S]orry you have yet to realize that every gay person is very necessary.” 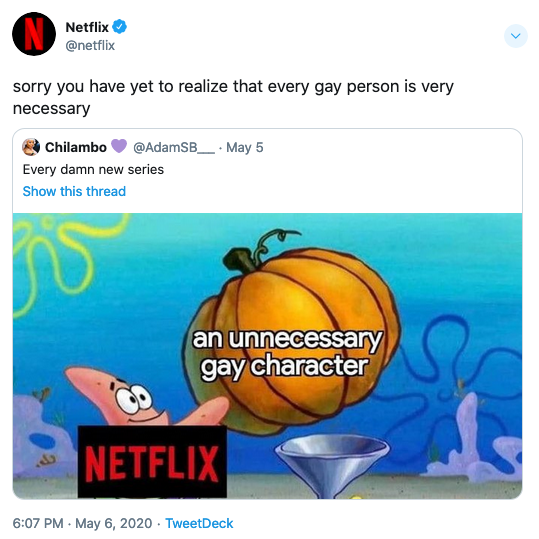 Notice how they try and twist it around to say that the meme says gay people are unnecessary. Every human being possesses inherent dignity and deserves the right to life, but we’re talking about fictional television characters.

And the point holds true, almost every single tv show has a token LGBTQ character randomly inserted because the SJWs scream, “Representation matters!” On MRC Culture’s On TV blog we don’t even keep track of regular adult gay characters anymore, we only focus on when the agenda targets children and teens or is over the top.

Unsurprisingly, other channels and shows rallied to Netflix’s message. Freeform’s twitter even said, “Woooow. Wack opinions like this are the reason gay characters are overly necessary. Keep it up, @netflix.” with a gif of a Simpsons gay pride parade.

“Overly necessary” – as if to they need to overcompensate. Reminds me of the creator of How to Get Away With Murder declaring, “And to me, writing the gay characterization and writing some real gay sex into a network show is to right the wrong of all of the straight sex that you see on TV.”

Amazon’s Prime Video replied with a SpongeBob gif that shows him making a rainbow with his hands. AMC’s The Walking Dead twitter replied with one of their characters looking and laughing. Twitter TV replied with a gif from FX’s drag show Pose that has people fanning the number 10. Gay publications Out Magazine and Logo TV tweeted their approval. Other Netflix Twitter accounts also stepped in with their support.

As for tv representation, according to GLAAD, there is already “10 percent LGBTQ inclusion among broadcast series regular characters on primetime scripted series” – that’s over double the 4 percent of the population that claims to be LGBTQ. These sexualities are already over-represented on television, but GLAAD demands representation increase to 20 percent by 2025! No wonder Americans wildly over estimate the number of LGBTQ people, thinking they make up 25 percent of the population.

And no wonder this meme struck such a chord.