Prepare for trouble! It looks like the new season of Netflix’s kids' show She-Ra and the Princesses of Power (coming November 5) will feature “the first nonbinary actor to voice a nonbinary animated character in a recurring series role.” Just what parents have been waiting for!

Netflix’s LGBTQ Instagram account Prism was so excited to make the announcement that they produced a video of performer Jacob Tobia talking about the character. Tobia, who recently wrote a memoir titled Sissy: A Coming-of-Gender Story, said, “I play a character called Double Trouble who is a non-binary, shape-shifting mercenary, so functionally, I’m playing myself.” 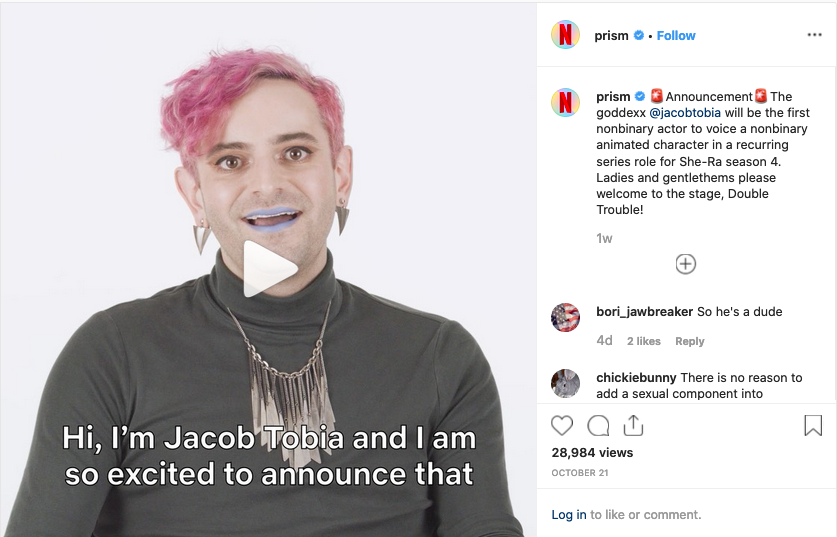 In response to the announcement, Digital Spy called the character “groundbreaking” and Deadline heralded it as “a move to authentic representation and inclusion.” Yes, a “non-binary, shape-shifting mercenary” is very authentic and representative.

But, no matter, it’s escapist fantasy, said Tobia, "Fantasy has always been so, like, vital to me because as a non-binary person, it’s a way of escaping the confines of the world we live in, right? It’s the way of building other realities and imagining the world as it could be, not as it is." And “the world as it could be” turns out to be just the way the LGBTQ lobby wants it.

Reminding us that this is a show for kids, Tobia addressed the indoctrination of children that the show promotes and encouraged it:

Having non-binary representation in animated shows for young folks is just so vital because young people today are already understanding that gender is diverse and a broad spectrum from a super early age, right? So, it’s about time that the shows that we’re making for young people reflect the world as they understand it.

Collider, too, was enthusiastic about propagandizing kids' shows, “The children are indeed our future, and it’s downright inspiring to hear Tobia and the rest of the She-Ra team’s focus on making their future — and frankly their present — as bright and encompassing as possible.”

After the announcement, Tobia took to Instagram to offer thanks for the “overwhelming nonbinary love pouring my way from every corner of the internet.”

Tobia declared, “The Double Trouble fandom is already badass af [as fuck],” and shared fan art to “celebrat[e] the fuck out of what is already such a powerful shapeshifting fandom.” Nice language for a performer whose fans are supposed to be children.

She-Ra already has featured gay characters and storylines in the past. It looks like season 4 will be more than Double Trouble – parents, beware!