Rolling Stone gave liberal women in Congress the rock star treatment in their March issue, with glowing interviews and glamorous photo shoots. The “Women Shaping the Future” are Speaker Nancy Pelosi and "the new voices of the House" Reps. Jahana Hayes, Alexandria Ocasio-Cortez, and Ilhan Omar.

Each woman got their own article, with Pelosi getting the official "Nancy Pelosi: The Rolling Stone Interview." The magazine’s founder Jann S. Wenner tagged along with staff writer Tessa Stuart, bearing gifts of chocolates for the Speaker.

Stuart asked hard-hitting questions like, "As the Republican Party has gotten more racist and undemocratic, how does that change how you think about working to find compromise?" and "What was it like to work with Obama?" 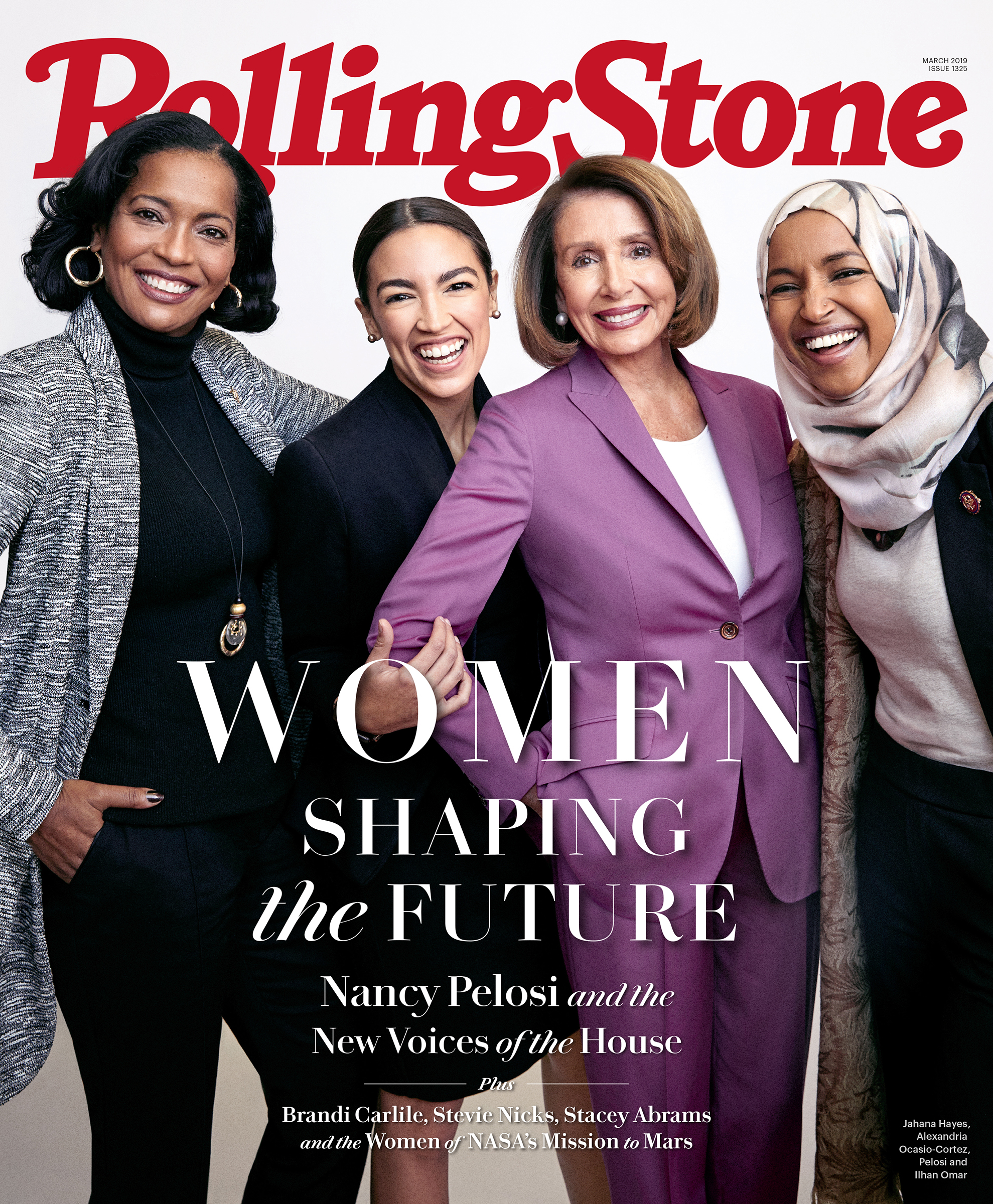 The biggest surprise was Pelosi's revisionist history in claiming she "loved" President George W. Bush. In talking about global warming, she asserted with no pushback, "President Bush was a denier. I mean, I loved him dearly, but he was a denier."

Asked about the "plan in case [Trump] declared the 2018 midterm results illegal," Pelosi demurred, "Well, I’m not going to divulge it, because we may still use it." Democrats and the media are always so quick to worry about Trump when their own presidential candidate Hillary Clinton delayed her concession on and many still don't consider Trump's win legitimate.

I believe that impeachment is inevitable. It also is a terrifying notion. Pence is an ideologue, and the ideology he holds is more terrifying to me and my constituents. ...Nations struggle any time [they] overthrow a dictator, and Trump really has the markings of a dictator.

Alex Morris interviewed Reps. Hayes and Ocasio-Cortez. Hayes seemed the most reasonable of the group (which is relative), declining to say she would impeach Trump today, urging everyone to go through the "process" and "operate in facts." But when Morris kept pressing her ("But what about all the anger out there?") Hayes said, "Do not let this psycho steal your joy."

Ocasio-Cortez was typical, but Morris was especially unprofessional in fangurling over the congresswoman, who is her representative, gushing, "Her striking features are almost impossibly symmetrical... her answers pointed and well-constructed."

Then, consider this exchange where Morris encourages AOC's crazy:

Would you vote to impeach Trump?

Ocasio-Cortez was allowed to lash out, attacking Republicans as "shar[ing] the action and the agenda of bigots," blasting “unlikable” as "an unsubstantial, unsubstantive, fluff, bullshit, misogynistic word to use" and saying, "The last time I was pissed was the president’s bullshit border address, watching this guy just be racist from the Oval Office."

If these are the women shaping the future, God help us all!