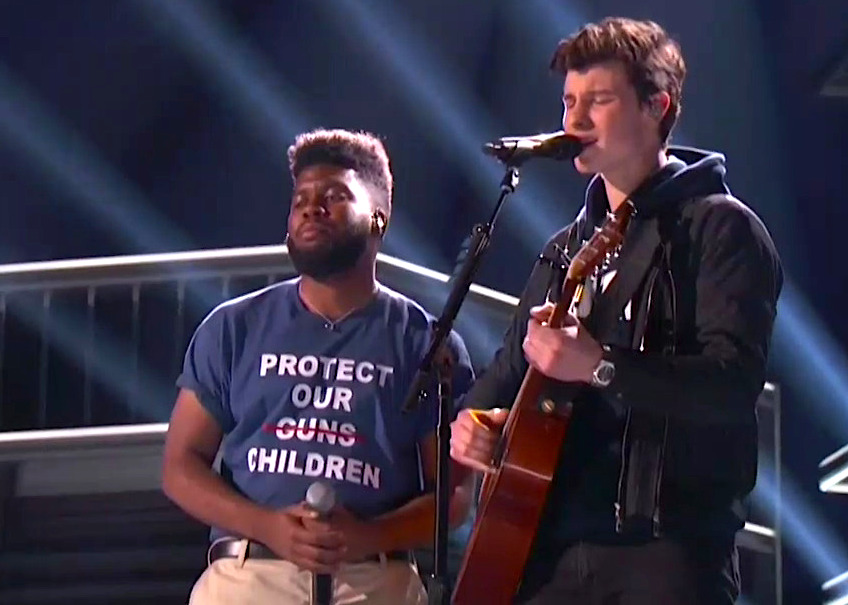 In the wake of the horrific shooting at Santa Fe High School in Texas, celebrities seized the opportunity to do the same old song and dance on gun control at the 2018 Billboard Music Awards on Sunday night, including one performer who prominently sported an anti-gun shirt on stage.

Singer Bebe Rexha asserted that students from Santa Fe High School joined the "March for Our Lives" gun control protests last month, which might be true but completely disregards the victims and families who support gun rights.

Rexha was there to introduce the song "Youth" by Shawn Mendes and Khalid, which was performed for the show as a tribute with the choir from Marjory Stoneman Douglas High School. With the symbolism of the students obvious, Khalid also wore a bright blue shirt with the words "Protect Our Guns Children," as if the two are mutually exclusive and ignoring the fact that millions of families rely on guns to protect their children.

Bebe Rexha: This past Friday we experienced another tragedy and this time at Santa Fe High School in Texas. Just a few weeks ago, many students from that very high school joined the protest against gun violence and they are no different than tens of thousands of young adults across this nation who took a stand and are raising their voices to say things must change. They inspire me with their hope, with their compassion, and with their determination to make a difference and build a better world. Here to pay tribute are Shawn Mendes and Khalid joined by the show choir from the Marjory Stoneman Douglas High School in Parkland, Florida.

Khalid and Mendes:
♪♪ here I am stuck on this couch scrolling through my notes how it was broken still no growing ♪♪
♪♪ waking up to headlines filled with devastation again my heart is broken but I keep going ♪♪
♪♪ pain but I won't let it turn into ♪♪
♪♪ hate no I won't let it change me ♪♪
♪♪ you can't take my youth away this soul of mine will never break as long as I wake up today ♪♪ …

Host Kelly Clarkson stopped short of directly mentioning gun control in her emotional opening, but still said, "I'm so sick of moments of silence. It's not working," which seemed to echo the liberal refrain mocking "thoughts and prayers" as empty, meaningless and hypocritically insincere words. Thankfully, she did acknowledge that "we want to pray," but instead of a moment of silence, which is often a moment for quiet prayer, she wants a "moment of action" or "moment of change."

Clarkson: Before we start tonight’s show, there’s something I’d like to - this is going to be so hard - here is something I'd like to say about the tragedy Friday at Santa Fe High School. So sorry. I'm a Texas girl, and my home state has had so much heartbreak over the past year and once again, y'all, we're grieving for more kids that have died for just absolutely no reason at all. Tonight they wanted me to say that obviously we want to pray for all the victims, we want to pray for their families, they also wanted me to do a moment of silence. I'm so sick of moments of silence. It's not working. Like, obviously. So. Sorry. So why don't we not do a moment of silence? Why don't we do a moment of action - why don't we do a moment of change? Why don't we change what's happening? Because it’s horrible. And mamas and daddies should be able to send their kids to school, to church, to movie theaters, to clubs - you should be able to live your life without that kind of fear. So we need to do better so people, we are failing our children, we’re failing our communities,we’re failing their families. I can't imagine - I have four children. I can't imagine getting that phone call or that knock on the door. So instead of a moment of silence, I want to respect them and honor them with tonight, y'all, let’s, in your community, where you live, your friends, everybody. Let's have a moment action. Let's have a moment of change.

But at least Clarkson left her plea open-ended, not telling us exactly how to act or change, or giving us the false choice of guns or our children. That's probably the best we can expect, clearly these other gun-grabbing singers won't be changing their tune anytime soon.