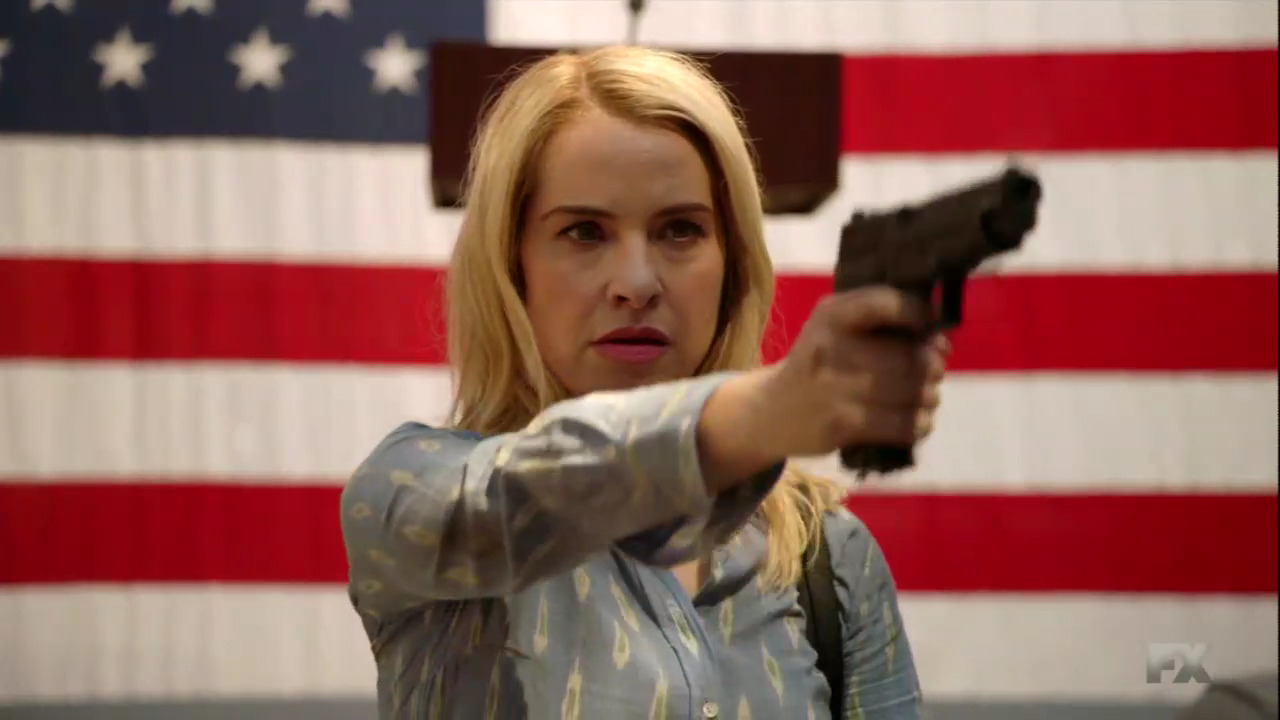 Tuesday’s episode of FX’s American Horror Story: Cult tried to make a statement on guns in an odd way. The episode titled “Mid-Western Assassin” opens with a mass shooting at a campaign rally, but in the wake of the Las Vegas shootings, the scene was re-edited for broadcast.

My point of view was I believe I have the right to air it, but I also believe in victims’ rights, and I believe that now is probably not the week to have something explosive or incendiary in the culture because someone who was affected might watch that and it could trigger something or make them feel upset.

However, FX announced it would make the original version available on FX Video-On-Demand, FXNOW and FX+.

The opening scene shown on TV focused on Ivy’s (Alison Pill) horrified reaction, we only hear gunshots and see people running and on the ground. The unedited version is twice as long and we actually see people being shot and killed, including a man who tries to help Ivy run who gets taken down by a bullet, then gets shot in the head as she holds his hand.

The notoriously liberal Murphy said, “It was meant to be an obvious anti-gun warning about society.” But it’s not exactly an obvious commentary on guns when cult leader Kai Anderson (Evan Peters) convinces one of his followers, Meadow (Leslie Grossman), to shoot at him and others at a campaign rally so he can gain national attention for surviving an assassination attempt. (“I'll be shot, hospitalized, and then recover-- stronger than ever. We're a Christian country. Everybody loves a resurrection,” Kai explains while getting it on with his lover/assassin.)

Kai already got himself beat up so he could use it as a platform to run for City Council, then orchestrated a bloody ritualistic satanic murder to be broadcast on TV to scare people so he’d go up in the polls, but when a gun is used for similar lethal public manipulation, that’s supposed to be a clear societal warning? And don’t even get me started on the sickening scene last week where the cult was all forced to drill nails into one member’s head. Was that an obvious anti-nail gun warning about society? Give me a break, Murphy just loves wallowing in gratuitous violence.

At a City Council town hall debate, crazy cult leader Kai implies that the new Trump Administration is on his side and claims scaring people to keep them safe is just part of “traditional conservative values.”

Surprisingly, Sally Keffler (Mare Winningham), a pot-smoking feminist who went to Berkeley, is the one to call Kai out and say he’s not a conservative, contrasting him with Barry Goldwater and Ronald Reagan. (Funny how only now in the Trump era are these conservative giants given any respect from the left.) But she lumps Kai and Trump together as flies on garbage running fear campaigns.

Kai: Friends! Please, please. The federal government is now run by people who believe, as I do, that a real change has to happen on the local level! Yes. Washington, D.C. is not gonna save you when the bogeyman comes. And mark my words, he not only will come, he has come to our little hamlet. The monsters are here. It's time to be scared.

Kai: Excuse me, ma'am? Could you stand up for all of us, please? And state your name.

Kai: Ms. Keffler, you have a problem with something I'm saying.

Sally: I think you're a snake oil salesman. And not even a very good one.

Kai: So... There haven't been a series of horrible murders over the past month or so, including the brutal slaying of Councilman Chang. And I wasn't beaten up by a gang of illegals. And Bob Thompson's satanic murder wasn't broadcast on television.

Sally: Overall crime is down 14% from last year, and almost 30% from 1980. We need to get serious about finding whoever's responsible for the crimes you're talking about, but you're just trying to make these people scared.

Kai: You're damn right I am. Scared is what is gonna keep them safe. Traditional conservative values.

Sally: My parents were Reaganites. I interviewed Barry Goldwater for my high school paper. I've seen conservatives up close; you're not a conservative. You're a reactionary. You use fear and the fantasy of a time that never was, when people left their doors unlocked. People like Mr. Anderson and Trump are not the garbage. They are the flies that the garbage has drawn. It's time that we stop worrying about the flies and we start hauling away the garbage. I can no longer sit by and let another candidacy of fear win another election, which is why I am officially declaring my candidacy for city council.

Honestly, I’m shocked the show took the time to separate cult killer Kai from conservatives, not that its liberal viewers would care much to make such a distinction.

Later, when Ally (Sarah Paulson) tells Sally that Kai is running a murderous cult, she of course blames the patriarchy: “This is the kind of shit that happens whenever the patriarchy is threatened. Manson was a product of the '60s-- women's lib, the pill. Jim Jones, too. It's no coincidence that Koresh went up against Janet Reno. David Koresh came to be because of Janet Reno. Men are told their whole lives who they're supposed to be, so they never figure out who they really are.”

Alas, Sally embarrassed Kai at the debate and is a threat to his candidacy, not to mention she’s one of the few people who know the truth about Kai, so the clown cult comes to her house to kill her. But before staging the murder to look like a suicide, Kai puts some of his own “fake news” on Facebook.

Kai: You know what the problem is with you overeducated elites? You overestimate your ability to control the world.

Sally: Killing me is not gonna stop the march of progress.

Kai: Maybe. But it's still gonna feel so fucking good.

Sally: This is a spasm in democracy! You're nothing but a passing fever.

Kai: And you're the last of the intellectuals. Knowing stuff has no value anymore. Not when the answer is in my back pocket or sitting on my desk. The youth has it figured out. The future will be filled with beautiful idiots who just want to feel. Facebook? You are old.

Gary: Can I please kill her?

Kai: No, no, Gary. Too sloppy. We have to send a message with Sally that the world she knows is dead. "Dear followers and friends, Tonight, after many long nights of careful thinking, I have come to realize something. That the truths we have always held to be self-evident-- all men are created equal, knowledge is power, ask not what your country can do for you but what you can do for your country-- They are all bullshit. The future will be guided by self-interest, self-promotion, and narcissism. And that is a future I cannot stand. And so this is my suicide note."

Kai: Already getting some likes.

Sally: No one's gonna believe any of that!

The episode ends as it began, revealing more details of the shooting, and is way more graphic than the edited opening. We see Meadow shoot a girl in the back from close range, several other people picked off, and then Meadow puts the gun in her mouth and blows her own brains out. In fact, the ending scene perfectly matches up with the original opening, they are just from two different points of view – in the ending you can see Meadow targeting the people who are shot around Ivy in the original opening.

If they were going to edit the opening why not also take the time to edit its equally graphic mirrored scene at the end?

Oh, well, the show surely got a lot more publicity for announcing it would edit the episode and more traffic driven to their other properties hosting the unedited version for the curious. Kai would approve.