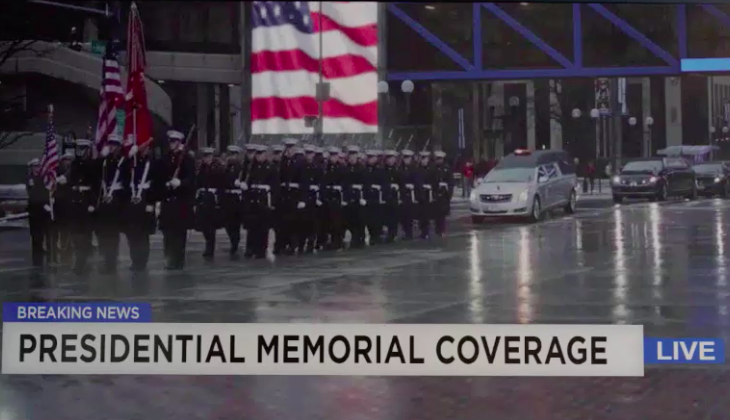 In its newest episode, “Got Milk?” Fox’s post-apocalyptic comedy Last Man On Earth gave viewers a flashback to the time when the pandemic that has wiped out most of earth was just starting – and the show seemingly takes great delight in the current cabinet of  Republicans dying in office.

We see the viral outbreak unfolding through the eyes of rich socialite Pamela Brinton (Kristen Wiig) as she gets the news. Through her AI speaker we find out that somehow Mike Pence is president.  What happened to President Trump? They never say. Then we see a funeral procession for Pence and everyone else in the presidential line of success as they all die from the virus: Paul Ryan, Rex Tillerson, Steve Mnuchin, Jeff Sessions, and Betsy DeVos. Ah, it’s all a liberal’s dream!

Pamela: Alana, what are the headlines?

Alana: Flooding in Tennessee is expected to continue through the weekend. President Pence plans to visit the affected areas. The Federal Pandemic Agency has released new guidelines for combatting the emerging viral outbreak.

Benjamin: Pamela, we talked about this. There is no vaccine.

Pamela: Well, something fishy’s going on if you ask me. You mean to tell me that the president of the United States doesn’t have a vaccine? Yeah, right!

Their little joke isn’t even well researched. It should be Jefferson Beauregard Sessions, not “Jeffery.” In the presidential line of succession, they also skip the President pro tempore of the Senate, currently Sen. Orrin Hatch (R-Utah), who is third in line, and Secretary of Defense James Mattis, who is sixth. After Attorney General Sessions (number 7), they skip to Secretary of Education Secretary DeVos who is number 10 - liberals love to hate on them both so I'm sure that's why they were included out of order. Also, Vice President Pence’s current age is 57, while Sec. DeVos is 59, and yet they each are said to die at the age of 61, which is obviously impossible on this epidemic timeline.

But worse than getting the facts wrong is wiping out the Trump Administration and Speaker Ryan and showing their caskets. (I'm hoping they staged these scenes and they're not footage taken from real military funerals.) Either way, it's shameful!