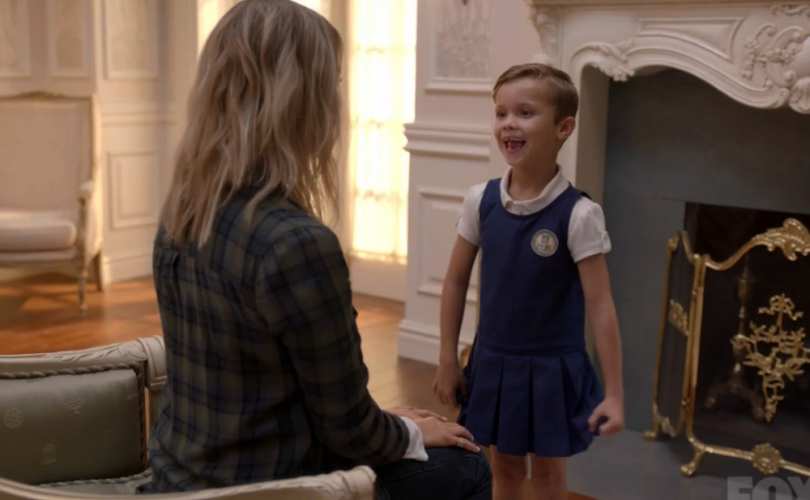 The new Fox "comedy" The Mick is receiving some much-deserved outrage for its depravity and sexualization of children. The show revolves around foul-mouthed, irresponsible grifter Mackenzie “Mick” Murphy (Kaitlin Olson) who is forced to look after her intolerable niece and nephews after her rich sister goes to jail.

The Mick airs at 8:30pm eastern, during what is traditionally part of family hour, and yet Fox felt the need to promote the series with a #KidsAreDicks campaign. They also created an explicit "Red Band" Trailer marked "viewer discretion advised" and age restricted on YouTube. The trailer lets the F-words fly - including when "F*** You" is shouted between 3 characters 6 times in 6 seconds.

Update: Fox has removed their explicit trailer from YouTube without explanation, but MRC retained a copy of it which is posted below. Warning: Explicit language!

Mick wants to be the "cool aunt" so she brags about her use of Planned Parenthood, lets her teenage niece have boys over and comments approvingly when she hears loud banging coming from her room, "Your sister is getting fu..." before censoring herself in front of her 7-year-old nephew.

Speaking of that 7-year-old nephew, he gets the worst of it. What they have Ben (Jack Stanton) doing is tantamount to child abuse. "I'm a Transformer!" he declares proudly as she fixes the collar on a dress he's put on. "Well...you're a trans - yeah, sure, close enough." At the end of the trailer the gender confusion is compounded when Mick says, "You look really good in that dress, by the way." To which little Ben replies, "Thanks, it kind of breezes on my vagina." "Yeah, maybe don't mention that, though," she responds awkwardly. Yikes! With all of this, no wonder some people thought the mouth gear he wore after burning his tongue on a hibachi grill was a bondage gag.

Olson, who also stars on It's Always Sunny in Philadelphia said of her new show, “I’ve spent 12 years on a show that my children can’t watch, so I’m very excited to do a family comedy." A family comedy you can watch with your children this is NOT. Steer clear!