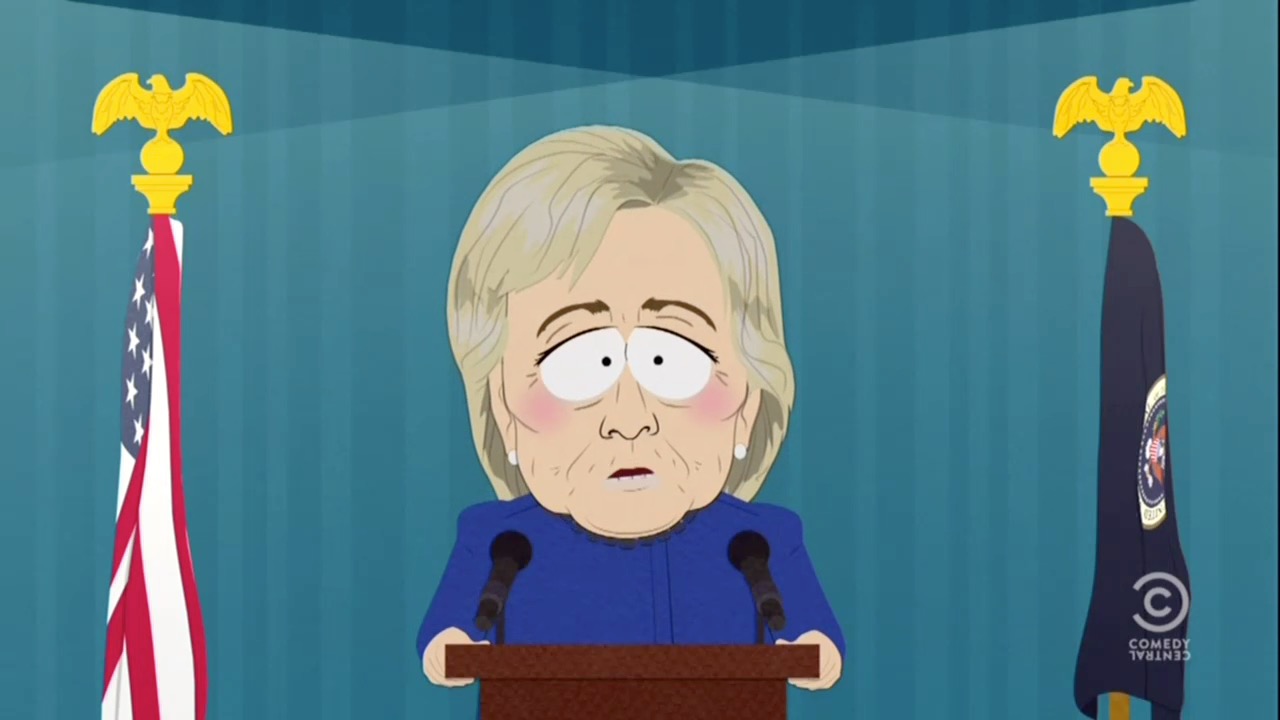 The much-anticipated premiere of South Park’s 20th season did not disappoint, featuring just the right level of timely, raunchy, bipartisan satire for which the show is known. In the episode “Member Berries,” creators Trey Parker and Matt Stone take on the National Anthem, female comics, and the presidential election in a way only South Park can.

National Anthem protests have gotten out of hand as four South Park Elementary School volleyball players sit out the Anthem to protest online harassment and trolling. Congress decides we need a new National Anthem and J.J. Abrams is turned to for a reboot - “He saved "Star Wars," and now we will ask him to save our country.”

In response to the girls volleyball team’s protest, there’s a great scene where Cartman absolutely skewers the New York Times (and all the other feminist media hyping the Ghostbusters reboot) for its piece over the summer titled Our ‘Ghostbusters’ Review: Girls Rule. Women Are Funny. Get Over It.

Cartman: Fellow students, as you know, an Internet troll by the name of skankhunt42 has been harassing women and girls by making degrading comments on our school message board. The girls are very upset, and many male students believe that it's just because girls don't have a sense of humor. I beg to disagree. Girls rule. Women are funny. Get over it. Just the other day in the hallway, I heard two male students saying how the new "Ghostbusters" sucked balls. I was shocked and appalled. It is time for us all to realize and accept that girls are cool and women are funny. Wendy? Wendy, could you come up here, please? Come on up, Wendy. Wendy Testaburger, guys. Wendy, go ahead. Be funny. Say something funny, Wendy. We can't wait.

Cartman: Hey, girls are funny Wendy, okay? Get over it. Just do women's comedy stuff -- you know, talk about how fat you are and how you want to have sex with guys and then say "My vagina!" a lot.

Wendy: I don't feel like being funny right now.

Cartman: And that's just the kind of sexist bull crap that's gonna keep you in the kitchen. Sit your ass down. This isn't a joke, you guys. Girls are funny. Bebe, why don't you come up here. Come on, Bebe.

Cartman: No? Come on, talk about having sex with guys and say "Vagina!" And stuff like that. Go ahead. Girls rule. Women are funny. Bebe, get over yourself, seriously.

Bebe: Get the mic out of my face!

Cartman: Huh. Oh, my God, that wasn't really all that funny. That's weird. Um... Let's see. Red, you got any zingers for the crowd? No? How about you, Nelly?

Cartman: ’Kay, that wasn't really funny. It was just angry.

Nelly: You see, what the problem is, is that when a little troll is allowed to say anything he wants anonymously, then he speaks for all you boys.

Nelly: Go ahead and get on our school message board and see what he's saying about us. Then see if you guys think it's funny.

“Just do women's comedy stuff -- you know, talk about how fat you are and how you want to have sex with guys and then say ‘My vagina!’ a lot.” Oh, man, if this doesn’t describe Amy Schumer, et al., I don’t know what does!

South Park, Colorado, is a swing state and Randy Marsh gets a knock at his door from a Gallup pollster asking him who he will vote for: the Turd Sandwich (Hillary Clinton) or the Giant Douche (Mr. Garrison). This leads to a family discussion at the dinner table that will be recognizable to many: How do we get here every four years, being forced to choose between a Giant Douche and a Turd Sandwich?!

Pollster: Hello, sir. I'm with the Gallup poll. We're trying to get a read on how people will be voting in the upcoming presidential election.

Pollster: Great. And will you be voting for the Giant Douche or the Turd Sandwich?

Randy: Well, this is usually a Giant Douche household, but we are going firmly with the Turd Sandwich. 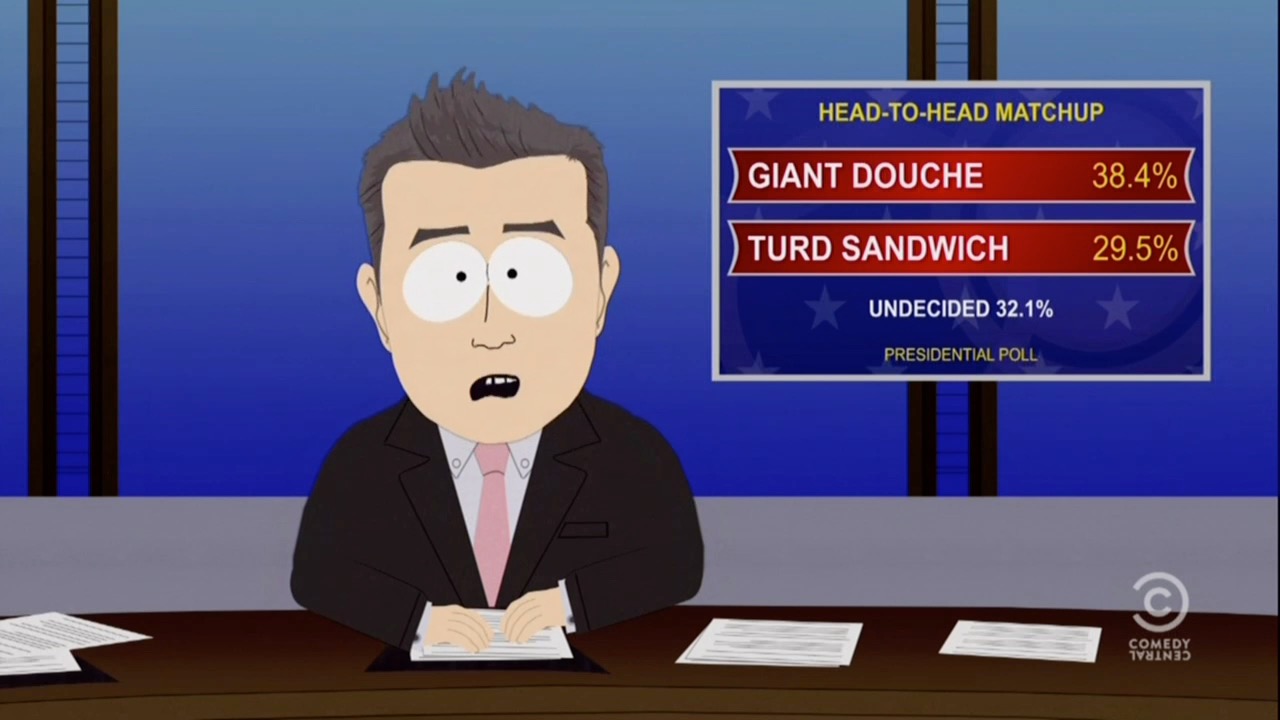 Randy: That’s right. You can put my wife and I both down for Turd Sandwich.

Pollster: Well, good luck with that. So far, Giant Douche is leading in the polls.

Randy: What? What the hell is wrong with people? They really think that a Giant Douche should be president? It's insane!

Sharon: Why’d you say I'd be voting for the Turd Sandwich, Randy? You haven't even talked to me about it.

Randy: You can't possibly be thinking about voting for the douche. What's wrong with you?

Stan: I just don't understand why every four years, you people freak out over whether to vote for a Giant Douche or a Turd Sandwich.

Randy: Because we're Americans. ‘Cause this is America.

Stan: Why are we doing this again? Why are we back to Giant Douche and Turd Sandwich? Randy: Cynical… Cynical man!

The Giant Douche Mr. Garrison is rising in the polls but he realizes during Matt Lauer's Commander in Chief Forum that he has no plan for if he actually wins the White House and that there is no way he can keep the original campaign promise that shot him to the top of the ticket: fixing the country’s immigration problem by "[bleep]ing them all to death.” He says he’ll look like a jackass so he needs to make sure Hillary wins. He tries phone banking for her to no avail - “I've tried to get people on board, but she's just such a Turd Sandwich.”

Mr. Garrison decides that the only way he can throw the election and get people to hate him is by sitting out the National Anthem at the special unveiling of Abrams’ version. As it turns out, J.J. Abrams comes through again with a solution that befuddles Colin Kaepernick, but unites the country in honoring America once again.

Mike: Hello, everyone. We are live at tonight's game between the 49ers and the Panthers. But of course what everyone is really here for -- the unveiling of the new national anthem, rebooted by J.J. Abrams.

Tom: And, Mike, this new anthem is said to have everything the old one had, but some new surprises, as well. You'd have to be an absolute asshole not to stand and support it.

Mike: This is such a big night for America that both the presidential candidates are here. There you can see the Turd Sandwich waving to all four people excited by her, and there is the Giant Douche doing the same.

Mr. Garrison: When I sit down to not support this thing, I'm sure to lose this election.

Mike: Here it is! And the anthem begins. Let's hope this fixes America.

Loud speaker: For our national anthem, we now ask you all in solidarity to please rise, or sit, or take a knee in order to honor America.

Mike: Now, whether people are standing, sitting, or kneeling, they are all honoring America. J.J. Abrams is a wizard, Tom -- a wizard!

Tom: More people sitting now as Abrams has made it irrelevant. Who saw this coming? And there's the rest of the anthem, all the parts we remembered and loved. J.J. Abrams has fixed America.

A brilliant South Park episode that had me laughing out loud while crying on the inside over the reality of my choice being between a Giant Douche and a Turd Sandwich.