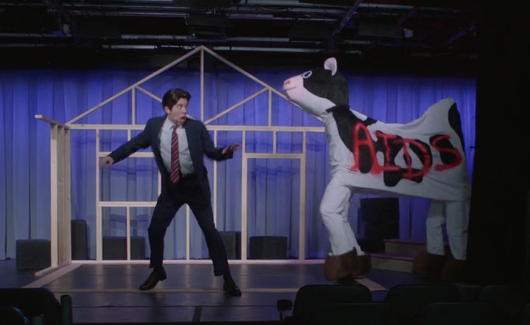 The Hulu original Difficult People, starring Julie Klausner and Billy Eichner, got political in episode 7 of the second season. The pair concoct a plan to make a historical musical like the Broadway smash “Hamilton,” name it “Carter,” and yet somehow manage to find a way to bash President Ronald Reagan.

The show has many LGBT characters, including the main character Billy, who is gay, and a transgender waitress at his coffee shop, so of course there must a nod to the gay conspiracy theory that President Reagan is responsible for the AIDS epidemic.

In this scene, Julie’s mom Marilyn (Andrea Martin) has brought in Bravo camera crews for a taping of Real Housewives of New York to give “Carter” some exposure. Real Housewives cast members LuAnn de Lesseps and Sonja Morgan guest star.

Matthew: I’m Ronald Reagan and this is a song about my legacy.

Marilyn: Put that away, put it away!

LuAnn: I don’t understand what this play has to do with Carter.

Sonja: Or us. Or anything.

LuAnn: This is just a waste of our time.

The inclusion of an aspect of Reagan’s presidency in a show about Jimmy Carter makes absolutely no sense, but perhaps they felt bad about the Carter bashing they did and wanted to do something to get back on the Left’s good side.

Both the main characters are Jewish and they rightly criticize Carter. When Marilyn hears who they’re doing a show about, she responds, "Carter? I hope you have a song about how much Israeli blood is on his hands from his negotiations with Hamas.” The musical includes lyrics like: “He pissed Israelis off, he called their policies apartheid” and “Making Palestine my Valentine, like Greg meeting Dharma.”

There’s also a bit at the end where Lin-Manuel Miranda, the real-life creator of “Hamilton,” comes in to complain that they used a fake quote of him praising their play in their flyers. When one of the characters tells him to enjoy his Tony Awards, he responds:

Oh, I do. Sometimes I pretend one’s a boy Tony and one’s a girl Tony and I make them kiss. Not that two boy Tonys can’t kiss, I don’t know why I said that, it’s very heteronormative. It’s just that I’ve already named them Roger and Desiree.

Miranda quickly corrects himself to allow for homosexuality lest he offend the political correctness police. God forbid it is implied that heterosexuality is normal, even though less than 4 percent of the population is LGBT.