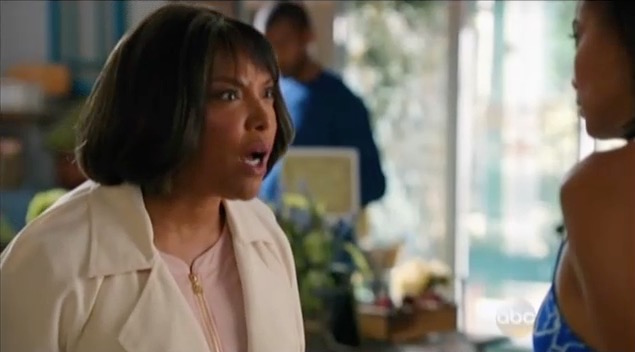 Once again the transgender issue rears its ugly head on ABC’s Mistresses. Perhaps they feared we didn’t get the message last time because now they’re beating us over the head about what is considered offensive, bigoted, and intolerant.

Now that April (Rochelle Aytes) has broken up with her boyfriend Marc, her nosy mom (Lynn Whitfield) is trying to find a rich man to set her up with. She sees "Michael" (a female to male transgender former client who kissed April then got upset she wouldn’t date him) in a magazine article and encourages April to rekindle things with him. When April tells her that Michael is transgender, her mom is shocked to the point that April tells her she’s being “offensive.”

But April’s mother wants to be clear that it’s unnatural, even though in La La Land anything goes.

April: It just didn't work out.

April: I did not get fired. He kissed me, okay? It was just a whole awkward, uncomfortable thing.

Mom: Well, now that you're single, you should call him.

April: It’s not that simple.

Mom: Well, it seems simple enough to me.

April: Michael is transgender, and he didn't tell me at first, so it just got all weird.

Mom: Transgender? Really? He was a woman?

Mom: And you knew it, and you still worked with him?

April: Would you lower your voice? There are customers around, and you are being offensive.

Mom: I’m being offensive? I mean, what is the world coming to? And please tell me why these people think they can flaunt themselves in front of everybody and we all have to accept it? I mean, you know what? I take back what I said. I thank God that you got out of this mess.

April: Okay, stop! You do not have to have an opinion about absolutely everything in my life. First, Marc, Lucy, now Michael.

Mom: I am a judge. It is my job to have an opinion. And my opinion is that's unnatural.

April: Quiet. You are making a scene.

April is appalled at her mother “making bigoted comments about Michael” and worries that she might turn out to be like her. She even asks a friend, “Do I seem intolerant to you?”

Later, April goes to confront her mother about it. April doesn’t want her own daughter to hear anything that’s not completely positive about transgenders because “we try not to think that way around here.”

April: We need to talk.

April: About your attitude.

Mom: Excuse me? Oh, this isn't about that transgender thing?

April: Yes, and about Marc, too. When you say things like you said yesterday, people are gonna think that you're not a tolerant person.

Mom: What did I say that was so bad? You stopped working with him, so obviously you feel the same way about those people.

Mom: You know, that's your whole problem. You either think too much or not at all. That's not how I raised you.

April: I thought you raised me to be tolerant of others.

Mom: I raised you to be a proud black Christian woman. Not running around with people who have none of the values you grew up with.

April goes on and on about tolerance, but we all know that tolerance is never enough when it comes to LGBT issues, we all must be made to support and celebrate them. Anything less is “offensive,” “bigoted,” and “intolerant.”