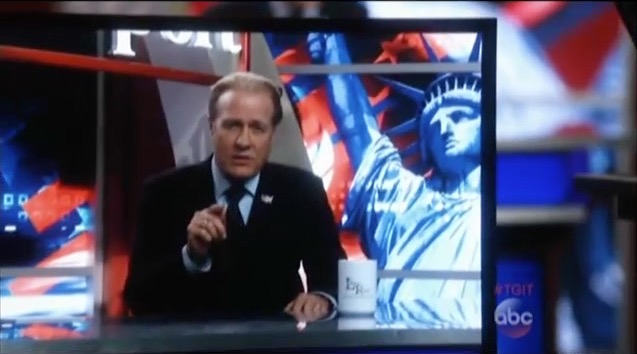 If you ever want to know what liberal Hollywood really thinks, just watch a Shonda Rhimes show. In about every other episode she has characters going off on thinly veiled, self-righteous liberal monologues. Tonight, ABC’s Scandal had two separate characters rant about "white men" and "country people."

For those who aren’t unfamiliar with Scandal, GOP presidential primary candidate Hollis Doyle (Gregg Henry) is a character intended to spoof Donald Trump. The similarities in this particular show are endless: The opposing campaigns despair that “no matter what he does America loves him,” an ex-wife claims he raped her, he’s asked to disavow the KKK, and one of his slogans is “Dare to be Great Again.” Just to hit you over the head with it some more, the episode is titled “Trump Card.”

In order to get Doyle out of the race, Olivia Pope (Kerry Washington) has a meeting with him purportedly to discuss having her candidate be his VP nominee. She secretly records the conversation where Doyle reveals his racist schtick is all an act, that the people are stupid, and he’ll change for the general election. It is a liberal Hollywood writer’s dream of what a behind the scenes discussion with Trump would be like.

Doyle: I always knew you were the smart one.

Olivia: I want Mellie Grant on that ticket.

Doyle: Oh, so do I. So do I. Classy piece of ass, that lady. Elevates us both.

Olivia: However, we do have some serious concerns about your message. It's exclusionary, and deeply offensive.

Doyle: Oh, hell, you don't think I believe any of that racist crap I spew out there in the boonies, do you? [ Scoffs ] I'm a businessman, Livvie. Just giving the customers what they want. And you thinking I'm some kind of deep-fried cross burner 'cause I'm from south of the Mason-Dixon ain't exactly open-minded, you don't mind me saying.

Olivia: Personal beliefs aside, your speeches, your rhetoric --

Doyle: Is for a specific market. And when I get to the general, all them mouth-breathing morons who couldn't read a newspaper column if their lives depended on it, well, they'll think I only just started telling people what they wanted to hear, and they got the real me six months ago. To tell you the truth, my most pressing concern is there ain't enough Purell in the world to make me want to keep shaking their filthy, inbred hands. I mean -- ugh! -- Country people. Am I right? So, we got a deal?

Olivia: We got a deal.

Ok, I must admit, that I, too, wish this scene had played out in real life with Trump and his candidacy collapsed like Doyle’s.

Meanwhile, on the other side of the aisle, Democratic primary candidate Edison Davis (Norm Lewis) wants to be out from under the thumb of Olivia’s evil father who is fixing the primary results. So Olivia convinces him to rant about Hollis Doyle and racism in public so he’ll be forced to drop out and there’s nothing her father can do about it. And, boy, does Edison go off! THIS is the speech that’s the true liberal Hollywood writer’s dream speech - a rambling, longwinded monologue lecturing on a litany of issues, from Black Lives Matter to Jim Crow, and concluding that America doesn’t “need to be made great again.”

Edison: You want a sound bite? You want the truth? Hollis Doyle is a disgusting piece of trash. A relic. A man, like many other white men, who have had a free run at prosperity and opportunity. For whom discrimination and injustice are as foreign to them as the Muslim immigrants that they want to ban from our country. And now that they don't have a free run, they're lashing out.

To be honest, I can't believe it took him explicitly expressing his racism for you all to start asking these damn questions. He ends every speech with "Dare to be great again." Huh? What? Should we return to slavery? Jim Crow? In today's America, my gay friends can get married. In today's America, I can vote. 50 years ago -- in Hollis Doyle's lifetime -- that wasn't the case. In today's America, my parents don't have to recruit a white couple who worked alongside them at the cereal plant to apply for a mortgage because banks wouldn't lend to folks with brown skin. In today's America, we have the Brandon Bill, which means I may not have to tell my future son that he could be murdered by law enforcement just for asking why he was pulled over.

Black lives do matter because young black people are under attack. Immigrants, too. The fact that Doyle insists on saying "All lives matter" when talking about this movement really pisses me off. It's like walking up into someone else's funeral and screaming, "Why are you not crying for my daddy? He's dead, too." Well, yes, he is. And that is sad. But that is not the topic of the conversation. Go stand over there and let the adults talk.

Reporter: He just lost the presidency.

So both candidates from opposite parties flame out with their brutally honest speeches ranting about “mouth breathing morons” or “thugs and punks.” This is what Hollywood thinks of you, Middle America, conveniently spoken through the “fictional” characters they create.

Also from tonight's episode: ‘Scandal’ Lead Character on Abortion: ‘I’m Not Ashamed at All’