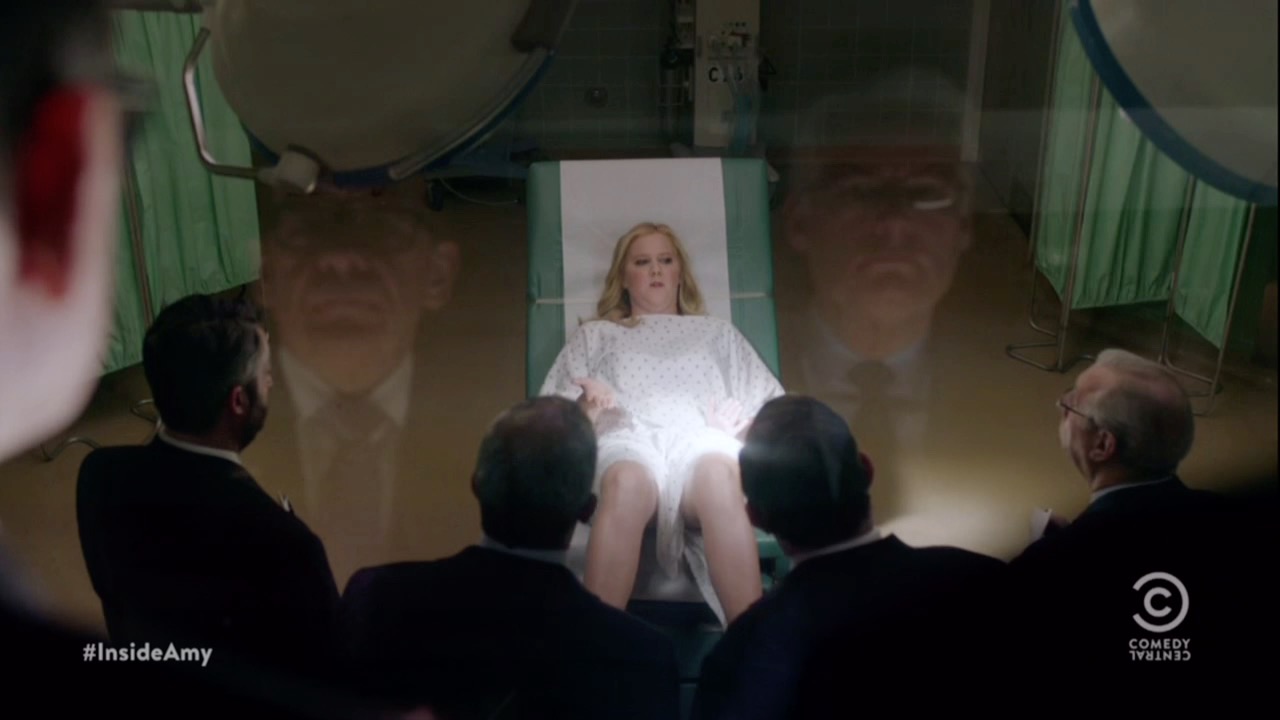 Inside Amy Schumer began its fourth season tonight on Comedy Central, and apparently the "Inside" part of the show title is literal. If there's one thing lefty Amy Schumer wanted everybody to know in the premiere, it's that she is obsessed with her vagina.

In the episode titled “The World’s Most Interesting Woman In The World," Amy interviewed her bikini waxer and asked "How would you describe my vagina?" and "Is my vagina and my asshole, are they like spaced correctly?" She even asked, "Has anybody ever said, 'What's Amy's vagina like?'" Seriously.

The word "vagina," or various other crude slang terms for it, was used 16 times in the show. In one sketch she asked her friends, "What movie do you think best describes your vagina?" There was a parody commercial about a new yogurt called Yo-Puss that "makes your pussy taste like nothing!" And then there was the hit-you-over-the-head-with-it skit with Congressmen playing gynecologists and doing a well-woman exam on Amy.

Amy: No, you're a bunch of congressmen. I recognize you. I just need to get my annual Pap smear.

Amy: Do any of you have any medical training?

Congressman: We're the House Committee on Women's Health. So I think we have a better idea than a bunch of science-y nerdles.

Congressman: Let's begin. When was the date of your last lady curse?

Amy: Two weeks ago, if you mean my period.

Congressman: And how many blood diapers did you use?

Congressman: And that is...?

Congressman: Now, it says here you are 34.

Congressman: How many children do you have?

Congressman: But it says here you're 34.

Congressman: Are you sexually active?

Congressman: And how many children do you have?! How often do you and your husband, um...?

Congressman: Oh, so you're a virgin. Well... (Laughter) Have a lollipop and run along.

Amy: No, I'm not a virgin! I'm just not married! I just need my annual Pap smear to make sure I'm healthy. I have a family history of cervical cancer.

Congressman: How many men have you laid with in the last year?

Amy: Jesus. Don't two of you have like secret families with your maids?

Congressman: We're not the ones on trial here!

Congressman: Guess we have to do the vagina-y part.

Congressman: Remember... Even though we're doing this, we are not your boyfriend.

Congressman: Scooch down on the table, put your legs in those restraints, and present.

Amy: What? Wait. I feel a lot more comfortable with a woman in here. Aren't there any women on the Women's Health Committee?

This show was so lame and unoriginal it should have been called, “The World’s Most Uninteresting Woman In The World...And Her Vagina."