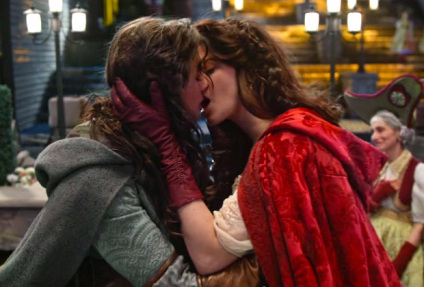 ABC's Once Upon a Time aired a lesbian kiss last night to much fanfare and excitement from the LGBT crowd and producers who said its inclusion in a show popular with kids was "important."

Once Upon a Time is a fairy tale adaptation utilizing favorite Disney characters in a modern-day setting. When it debuted in 2011 it was called "the most family-friendly drama on any broadcast network in the past ten years" and Common Sense Media rates it for children 12 and up. So naturally, with its family-friendly 8pm Sunday night time slot, it attracts younger viewers and parents who still think of Disney as wholesome.

Alas, we know that Disney has not been wholesome for years and once again they are purposefully pushing a gay agenda. Once Upon a Time's executive producers have said their gay advocacy is "important to do" and something that needs to be "normalized," not "marginalized." Last year, when announcing the storyline was coming, they said, “It’s [an LGBT relationship] something we think is due and important to do on the show. This is the world we live in.” But then they became uncomfortable with the hype the news was receiving, saying, "[T]he more we talk about it, the more does it seem marginalized as opposed to normalized."

Last night the lesbian kiss finally happened in the episode "Ruby Slippers" and, perhaps in a nod to friends of Dorothy, it was Dorothy and Ruby who shared "true love's kiss." The producers repeated the mantra "love is love," and again admitted that their goal was to normalize and push gay relationships "as a part of every day life."

Picking up in the wake of Ruby and Mulan (Jamie Chung) searching out the former’s wolf pack, the duo come across Dorothy in Oz, where they then team up to take down the recently returned Wicked Witch (Rebecca Mader). Unfortunately, Zelena places Dorothy in a sleeping curse, which leads Ruby to the Underworld in a bid to save her. As it has several times before on the show, the spell is broken by true love’s kiss — in this case, it’s Ruby who brings Dorothy back.

“True love’s kiss has been a staple of this show since the beginning,” executive producers Adam Horowitz and Edward Kitsis say. “This past Sunday’s episode was just another example of how in a fairy tale, as in life, love is love.” ...

Though the moment has been highly anticipated all season, the producers have always maintained that the couple’s love story would be no different from what the series has showcased with Snow White (Ginnifer Goodwin) and Prince Charming (Josh Dallas) or Emma (Jennifer Morrison) and Hook (Colin O’Donoghue); nor would the hour featuring the reveal be a “very special episode,” likely the reason behind the lack of targeted promotion ahead of Sunday’s episode. “Our goal is to make it as we see it in the real world, just as normal and as a part of every day life as it should be,” Horowitz previously told EW.

It's no wonder that gays continue to be over represented in the media and thus in the public's minds when you have show producers wanting people - especially kids - to think it's normal and every day life. But it's just another Hollywood fairy tale.