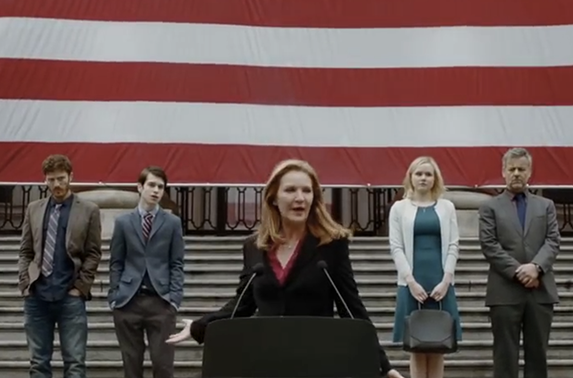 I’ve been wary of how ABC’s new suspense drama The Family would play politics from the beginning. The main character Claire Warren (Joan Allen), whose son has mysteriously reappeared after being missing and thought dead for 10 years, is a Republican running for governor in a campaign run by her daughter, Willa. It took until the third episode, “Of Puppies and Monsters,” for them to finally start hitting at Republicans, and I expect more to come.

In the liberal la la land where Republicans are always heartless and unfeeling, they have a Republican National Committee representative coolly lecturing about optics and “RNC talking points” for the first national news interview the shell-shocked family is giving since being reunited. A distracted Claire bristles at the instructions but Willa, ever the good soldier, promises that her mother will “toe the party line” to get the endorsement.

Joanna: In terms of optics, colors can really make or break you. We've found that Republican voters respond best to female candidates in red or blue.

Claire: To think I might have worn green. Crisis averted. [ Chuckles ]

Joanna: Uh, to keep you on message, I've assembled a list of RNC talking points for the interview.

Claire: I need to be myself here.

Joanna: And we've gone the extra mile and hired you an image consultant.

Claire: No, no. That won't be necessary.

Joanna: You're going to be on the national stage tomorrow, Claire. It can be intimidating and exhausting. Are you getting enough sleep?

Willa: I will make sure of it.

Claire: No, you know what's exhausting? Sleeping on a closet floor with an innocent child who was kept in a bunker for 10 years. Tell me what color you want me to wear, I'll wear it.

Willa: She's a little on edge, but when the time comes, she will knock it out of the park.

Joanna: The time is tomorrow. If you want our endorsement and our money, we need to feel confident that she'll toe the party line. And right now, we don't.

“This endorsement IS the race,” Willa tells her mother in urging her to act like everything is fine to the public. “They want to know you can win.”

But ABC can’t let basic facts get in the way of a knock at Republicans, now, can they?