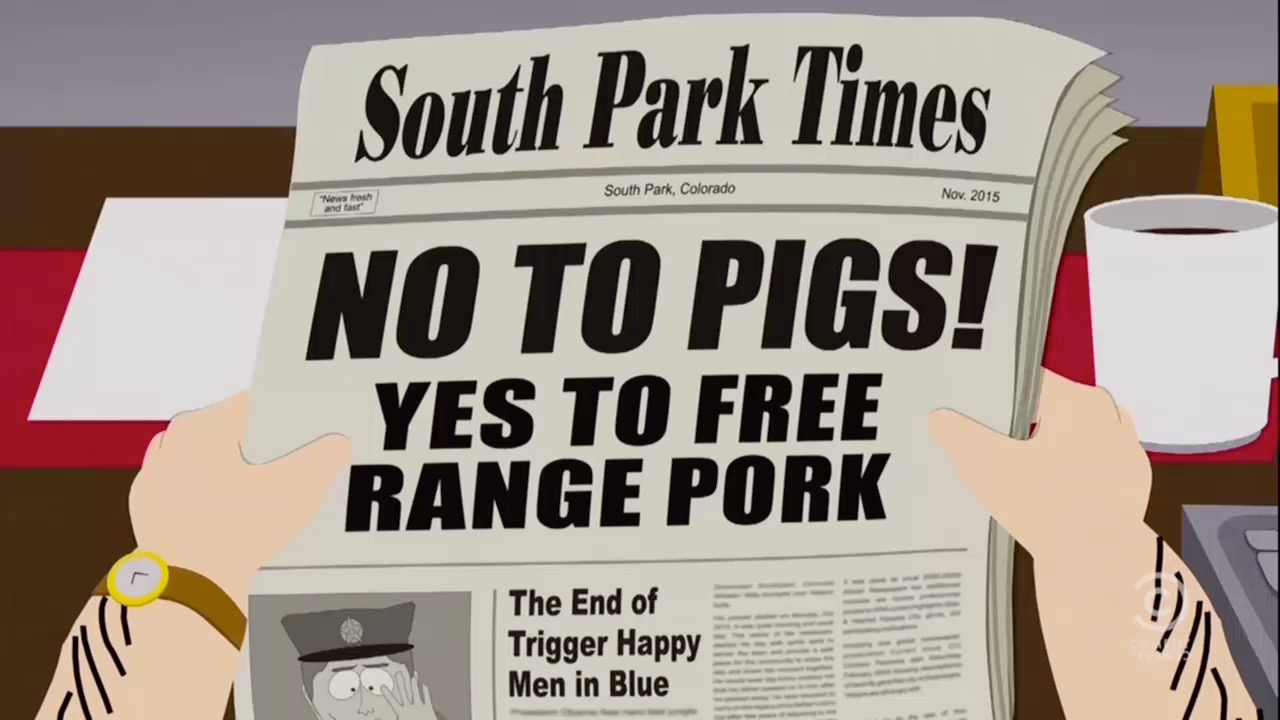 When Officer Barbrady accidentally shoots an unarmed 6-year-old Latino boy, the town of South Park rises up to get rid of the police, in the episode "Naughty Ninjas." (“We've only had a Whole Foods for a month, and already, we don't need cops. So cool.”)

In a montage set to “F*** the Police” by N.W.A., the white yuppies are shown dancing, holding glasses of wine and flipping the bird to the police. But when the South Park boys start dressing as ninjas to chase away the vagrants outside Kenny’s house when the police won’t, the townspeople think ISIS has taken over – and worse: the homeless people have started camping out outside Whole Foods!

Now the town suddenly realizes they need their police force back.

-Stephen: Officers, there's kids in town who have joined ISIS. We don't know who they are, but they –

-Mayor: The town is in danger, all right? We don't know what these kids are capable of.

-Yates: Geez. I'm sorry. We've got to work on our Kaholo Koloa and get the lomilomi chicken ready for the big Ho'olaule'a, which leaves us, oh, not enough time to deal with ISIS.

-Randy: All right, look, there's homeless people all over our gentrified food-and-arts district. If you don't stop these twisted kids, then –

-Yates: Hey, who was it that said [bleep] The police? Was that Ice Cube? Tupac? Oh, right. That was you guys. Sorry, but I guess you'll have to find somebody else to do all the difficult, dirty s*** you don't want to do yourselves. I got to be ready for the luau.

In the end, the police come back, but only after making a deal that the townspeople will turn a blind eye to their abuse of minorities. (“See, used to be we could beat up minorities, and nobody cared.”) So, as always, South Park ends up bashing and offending everyone.