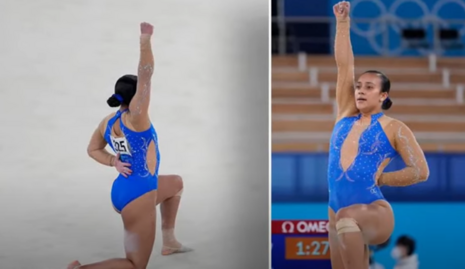 The Olympic games will now be adding a category for ‘best virtue signaler’ after Costa Rican gymnast Luciana Alvarado decided to throw up a fist at the end of performance in support of the Marxist organization Black Lives Matter. The 18 year old athlete defied the International Olympic Committee’s guidelines in a selfish attempt to make the games political and divisive instead of a unifying event.

The Olympic games is supposed to be a ‘safe space’ free from “political, religious or racial propaganda” according to IOC Rule 50. The committee released these new guidelines as a result of the violence and destruction that has been caused by BLM groups and riots around the world.

The rule specifically states that if we do not maintain a “neutral” environment in the Olympic Village then “the life’s work of the athletes around us could be tarnished, and the world would quickly no longer be able to look at us competing and living respectfully together.” Here's her defiant performance:

It took less than a week for Alvarado to completely disregard the message of unity and respect that the IOC was attempting to put forth. During the gymnast’s floor routine on Sunday she kneeled while holding her fist in the air at the conclusion of her performance. She also practiced this same move on Friday and told the GymCastic podcast that the gesture is a “silent protest for racial equality.”

"My cousin and I, we both do it in our routines," Alvarado said. "And I feel like if you do something that brings everyone together, you see that here, like 'Yes, you're one of mine, you understand things; the importance of everyone treated with respect and dignity and everyone having the same rights because we're all the same and we're all beautiful and amazing.' "

These would be very touching words if she wasn’t dead wrong. The Black Lives Matter organization has caused one of the most divisive political movements in recent times. This Marxist group does not bring anyone together, it thrives off of disunity and cost the United States alone more than 1 billion dollars in damages. As many as 19 people were brutally murdered during these protests and over 700 law enforcement officers were injured.

The IOC’s guidelines specifically state that “gestures of a political nature, like a hand gesture or kneeling” constitute a protest, “as opposed to expressing views.” There are consequences to these actions, but Alvarado’s failure to qualify for the finals is satisfying enough.

A little more practice and a little less activism, Alvarado.