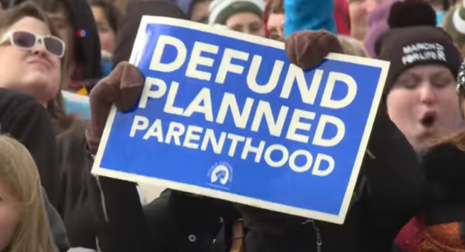 Thanks to people like Caren Spruch, the Senior Director of Arts & Entertainment for Planned Parenthood Federation of America, abortion stories have become routine in today’s entertainment industry. Campoamor and others are complaining that it’s not enough and baby killing should be represented and encouraged more than it already is.

Campoamor interviewed Renee Bracey Sherman, executive director of We Testify, an organization “dedicated” to brainwashing audiences into believing that fetuses are not humans. She discussed the idea that many women who get abortions have had at least one child already “but on television and film, it's nearly always someone young, white, and wealthy who is trying to avoid parenting.” She further stated that “This fails those of us who have abortions because it doesn’t allow for audiences to stretch their imaginations, empathize with our fictionalized experiences, and learn something outside of the same stereotypical narrative.”

Killing an unborn life is running away from parenthood and failing to take responsibility for your actions regardless of whether or not you already have a child. Parenthood is hard and expensive no one denies that. But a life is invaluable and every one deserves to have a future. No one should commit murder because it’s ‘too hard’ not to.

Campoamor pointed out that more than 40 shows in 2019 and more than 30 in 2020 had storylines that featured abortion, and the number of depictions increased from 2019 to 2020. But this is not enough for the radical abortionist.

The author of this article took to Twitter after conservative media began covering her deranged piece and revealed just how sick she really is:

4) So telling me I’m going to “burn in hell” or “face god’s judgment” or any variation of the aforementioned does nothing. If there is a god, I believe that god loves abortion.

5) My mom had an abortion. That is why she was able to have me. Can we get new talking points, please?

Merritt Tierce, a television writer and showrunner, was also interviewed for the story. She is currently working on a TV show that takes place in an abortion clinic and “is hoping to normalize abortion as just another choice in a wide range of decisions people make throughout their lives. And for characters who have kids, she wants to frame abortion as what it really is: a parenting decision.”

“I think the most radical reconception that needs to happen with respect to abortion, especially parenting people who have abortions, is for people to realize that it can be a serious act of love to have an abortion,” said Tierce.

Despicable. When you end a life out of your own selfishness, it’s called murder, not “love.” But now this deranged woman has her own TV show that young girls can watch and be encouraged to think this way.

TV is not reality and abortion is murder. Get the screen full of celebrities and their uneducated opinions out of your face and read a biology textbook, Campoamor.