Teen Vogue: Roller Derby is a 'Safe Haven' for Transgenders 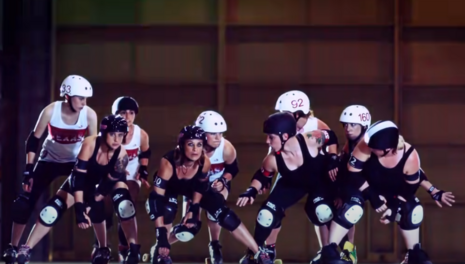 Women's sports are under attack from the ever-advancing transgender agenda. In response, the Save Women’s Sports Act has been introduced in 37 states so far. It prevents biological men from participating in women’s sports. But to hear the hard left tell it, it's the trans athletes who are on the defensive and in need of sports “safe haven.”

“One sport that serves as particularly strong evidence against the very premise of these bills: roller derby,” states Farrell Brenner of Teen Vogue. Brenner explains that the story of Tear O’Bite (aka Erin McCargar) and “her” domination of the sport just proves that bills to protect women from this exact scenario are unnecessary. McCargar is a trans woman of course, so this actually means that “she” is a he, and has testosterone levels way above any normal female. This could explain why McCargar is such a “star” in the sport.

Really Teen Vogue? This is a site targeted towards children between the ages of 12-17, and it's encouraging those readers to think that gender dysphoria is normal and worthy of praise. Hide your kids because it’s only getting worse.

McCargar began participating in roller derbies 10 years ago, after she found out about the Women’s Flat Track Derby Association’s (WFTDA) all inclusive gender policy. The WFTDA statement about gender says that they are “committed to inclusive and anti-discrimination practices in relation to all transgender women, intersex women, and gender expansive participants.”

This current policy has been in place since 2015. Before it was created the WFTDA had a rule that only allows transgenders to participate if their hormones were within an “acceptable range.” However, according to Erica Vanstone, executive director of the WFTDA, requiring skaters to prove that they are closer to being a female than a male was just too “invasive,” so it was expanded and now allows practically anyone to participate. Why even separate the men’s and women’s leagues at this point?

By definition, “gender expansive” is “an umbrella term sometimes used to describe people who expand notions of gender expression and identity beyond perceived or expected societal gender norms.” Some individuals who identify with this title do not claim one gender or the other and may even identify as a “mix.” In reality, gender expansive is another term for "deeply confused about biology." Seriously, how do they keep track of all of these terms? And how is someone who doesn't specifically consider themselves a woman allowed to participate in WOMEN'S sports?

Roller Derby is considered a “full-contact” sport and participants use “their hips, chests, and shoulders as walls and battering rams.” According to a study from the Journal of Applied Physiology, men have on average 26 lbs. more muscle mass than women, as well as 40 percent more upper body strength compared to women and 33 percent more lower body strength.