Businessmen often get a bad rep in the news media, but that wasn’t the case in a Barron’s profile of a former CEO who now works to help former prisoners because of his Christian faith.

“Answering God’s Call,” was the cover story of the Barron’s weekly business newspaper on Aug. 3. The paper profiled former Wells Fargo CEO Danny Ludeman, who stepped down from his position of 15 years in order to focus on his faith. 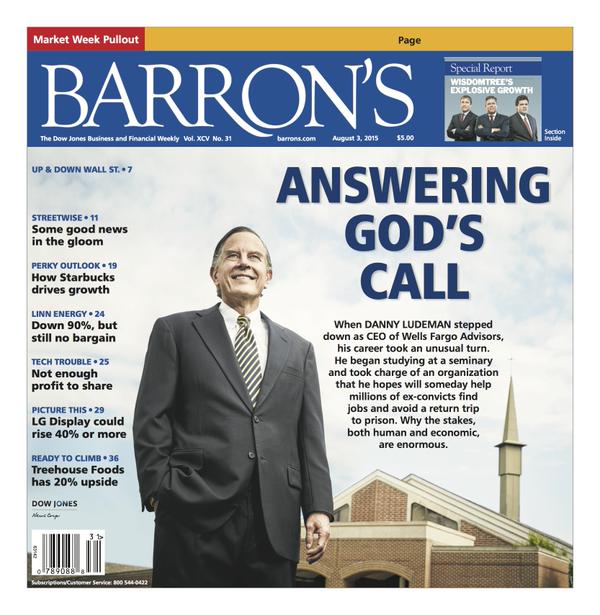 “That was very much my retirement plan,” Ludeman told Barron’s. “Learn to love God with all my heart and soul, and learn to love my neighbor as myself.”

One part of that goal was to earn a Master of Divinity degree from Covenant Theological Seminary. However, Ludeman also wanted to help those around him, potentially by leading a nonprofit organization.

He received many requests and eventually agreed to head a small group called “Project Cope,” which aims to end the high levels of re-incarceration in impoverished cities through post-prison training and counseling.

The former CEO is not only a Christian, Barron’s noted he’s also a Republican saying, “Ludeman, who calls himself a ‘moderate Republican,’ says that reducing mandatory sentences and favoring early release in some cases make sense, but providing re-entry services is crucial.”

That’s why one of the new programs Ludeman jumpstarted was the Concordance Academy of Leadership, an extension of Project Cope. The Academy provides counseling, job and life skills training, housing and more, in order to prepare former prisoners for a productive life. Its goal is to “reduce the percentage of its participants who commit new crimes to about 50% from the prevailing 77% nationwide rate.”

According to Finn, “Anyone who talks to Ludeman for a few minutes can see that he’s excited about the academy’s mission. As he puts it, ‘This could do more to help America’s African-American communities than anything else I know of.’”