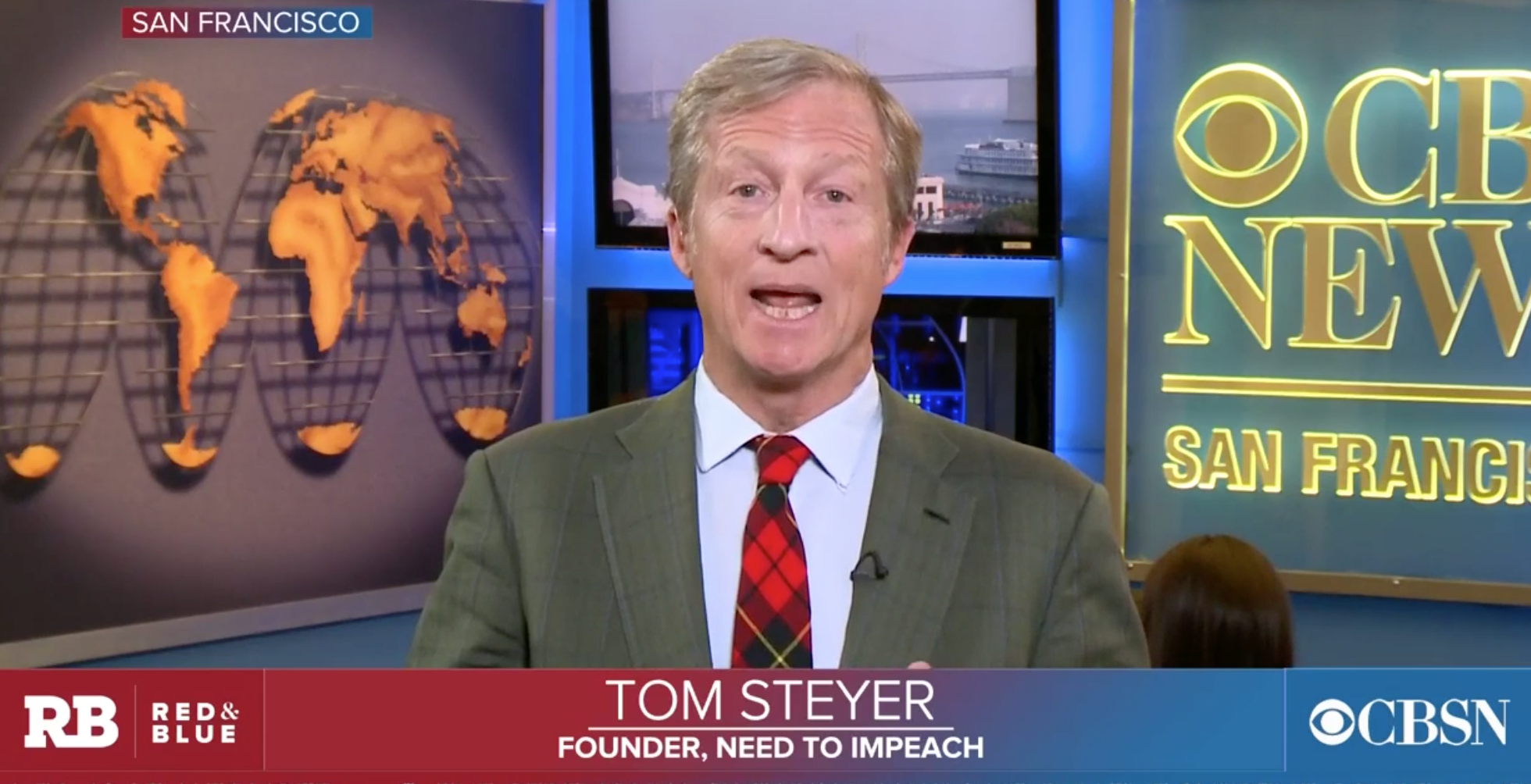 Left-wing billionaire Tom Steyer is such a tease.

The California mega-donor teased the media with a presidential run early in 2019, only to announce he wasn’t running. Now new reports suggest the major Democratic contributor and founder of Need to Impeach and NextGen America may jump into the crowded 2020 Democratic field after all.

He can expect a friendly reception from the liberal media.

The Atlantic broke the story and soon CBS, CNN and others followed suit. Ironic, considering how little the liberal media paid attention to Steyer as he spent $120 million building a political machine to impeach President Donald Trump. ABC, CBS and NBC evening shows censored news of his massive political campaign from Oct. 20, 2017, through the 2018 election.

CBS News online reported that a “source close to the campaign confirmed” they expected an announcement on July 9. Although it mentioned the $40 million Steyer committed toward impeachment in early 2019, it still failed to acknowledge the $120 million Steyer spent during the last election (ahead of the $40 million).

CNN.com also failed to note the extent of Steyer’s impeachment and campaign funding — giving no dollar amount. It said only “Steyer has operated as a funding force in Democratic politics in recent years, bankrolling candidates and organizations that promote liberal causes, including the impeachment of President Donald Trump.”

By failing to explain how much Steyer spent all three helped shield him from critics and continue his “David vs. Goliath” persona. In reality, Steyer spent $87.6 million on Democratic candidates and issues in 2016, making him the largest biggest individual donor of the election cycle. In 2014, he spent $75.4 million on candidates who supported his extreme climate views, but most of them lost.

The closest CBS came to criticism of the billionaire was the admission Steyer “would face some challenges many of the other hopefuls have: gaining name recognition and qualifying for the Democratic debates.”

None of the three networks acknowledged some of Steyer’s most extreme remarks or the hypocrisy of where his billions came from. Steyer has called Trump “a clear and present danger who is mentally unstable and armed with nuclear weapons,” and a “criminal.”

On Election Day 2018, he tweeted “The devil has been working hard these last two years, but as the saying goes, Not today, Satan!”

At one of his impeachment rallies, Steyer also failed to reject an attendee’s question, “I just keep thinking, what’s the difference between him [Trump] and Hitler?” Rather than immediately rejecting the comparison, Steyer compared the two saying Trump was a “skillful and talented communicator,” and Hitler “was too,” before pointing out a HUGE difference — Hitler killed millions of people.

The hedge fund manager turned climate crusader also made a fortune in coal, but if the media mention it at all, it is usually from Steyer’s perspective as if he were Saul on the “road to Damascus.”