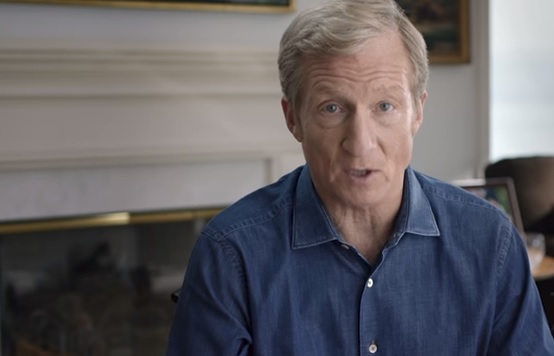 When a conservative says something crazy, it makes headlines. When a liberal does you can hear the crickets.

Liberal mega-donor Tom Steyer recently entertained comparisons between President Donald Trump and Adolf Hitler at one of his impeachment rallies. But his absurd conversation was not reported by the broadcast networks or major newspapers, according to Nexis. Steyer has spent or pledged at least $236 million to help liberal candidates, or oppose Republicans since the 2014 election cycle.

Only Twitchy and several conservative media outlets took Steyer to task for not pushing back enough when a rally attendee from Iowa asked him, “I just keep thinking, what’s the difference between him and Hitler?” The exchange took place at a May 10, Need to Impeach rally where Steyer was stumping against Trump and Republicans.

Rather than immediately say, WHOA! That’s going way too far, Steyer began with comparisons to Hitler — before reminding everyone of a huge difference: Hitler killed people.

“Mr. Trump has — he really is an incredibly skillful and talented communicator. He really is — which Hitler, was too. But let’s not — and I think the reason people push back against the Hitler comparison, regardless of any similarities, is Hitler ended up killing millions and millions of people,” Steyer said. [WATCH VIDEO]

He continued: “And Mr. Trump has shown a disregard for our law, he breaks the law, he has shown a disrespect for the idea of the law and in many ways he has done things that we find, or I find, abhorrent. But he hasn’t killed millions of people.” 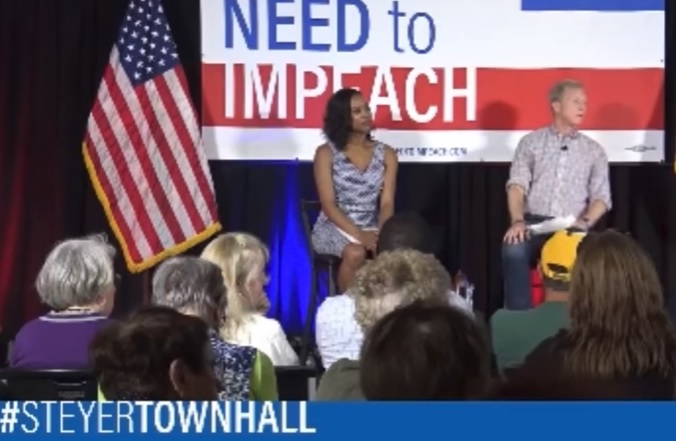 The crowd murmured loudly, dissatisfied with Steyer’s remark, prompting him to say, “I know. That’s why we want to impeach him. We want to end it here while it’s still OK.”

After pointing out again, that not killing people is a “very big” difference between Trump and Hitler, Steyer added, “We haven’t gotten to that point. God bless us, let’s hope we never get anywhere near that point.”

The Hitler comparison came up the very same week Steyer’s PAC released a Mother’s Day political advertisement portraying all Republicans and Trump supporters as racists, thieves and white supremacists. That ad was also a part of his impeachment efforts. The closing seconds warned, “Talk to your children about the Republican Party” and “Vote them out.”

Steyer launched his impeachment effort in October 2017, but it has not been reported on at all in ABC, CBS or NBC news programs, according to a Nexis search for “Steyer” and “impeachment” from Oct. 1, 2017, through May 14, 2018. Only a handful of political talk shows mentioned it during that span.

Following his huge political donations to Democrats and liberal groups in 2014 (more than $75 million) and 2015 (more than $91 million), Steyer spent $20 million on impeachment ads in 2017, and pledged another $30 million to engage youth to vote in 2018. According to an April 2018, Bloomberg profile of Steyer ( or “Mr. Impeachment” as they called him) the liberal billionaire has increased his pledge for the Need to Impeach campaign to $40 million. That’s a grand total of at least $236 million since the 2014 election cycle.