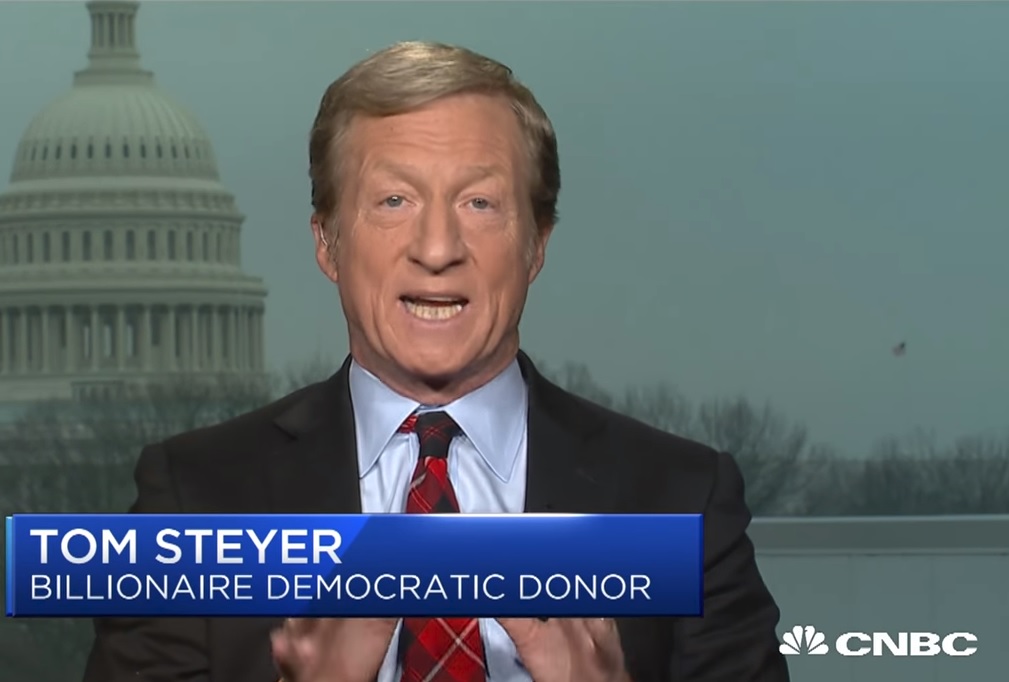 Liberal billionaire Tom Steyer is taking a victory lap now that Democrats have won a majority in the House of Representatives. But voters should wonder why broadcast networks failed to report on his $120-million dollar efforts to flip the House so that the left can impeach President Donald Trump.

The left now has the power to investigate and try to impeach Trump. NBC Nightly News acknowledged those “huge” stakes on election night, yet NBC, ABC and CBS evening newscasts ignored or covered up Steyer’s spending and influence during the election year.

The Atlantic rightly called Steyer’s organizations “the biggest political machine you’ve never heard of,” and the evening news shows were at least partly to blame for leaving voters totally in the dark.

Following the election CNN.com credited Steyer’s massive effort and the work of other billionaires with helping Democrats take back the a House majority. But since Steyer launched his initial impeachment campaign on Oct. 20, 2017, potential impeachment of Trump has been mentioned in just 32 stories on ABC, CBS and NBC evening news programs. Of those 32, only one referenced Steyer’s efforts at all, and only barely.

That means not a single network evening show on any of the three networks aired a clear story about a left-wing donor who spent $120 million, garnered more than 6 million petition signers and rallied tens of thousands of “supporters” to his impeachment cause — and is rumored to be a 2020 Democratic presidential contender.

It’s hard to image the networks ignoring a similar effort if the political parties were reversed.

That lone mention by NBC Nightly News didn’t even mention Steyer by name, referring to him only as “a businessman who advocates Donald Trump’s impeachment” after Steyer targeted with a mail bomb. A separate story about the mail bombs called Steyer a “billionaire donor,” but without noting his impeachment agenda.

If that wasn’t bad enough, Evening News also labeled the group as non-partisan instead of being honest about it and its founder’s liberal goals.

Steyer’s Anti-Trump Efforts Could Lead to Impeachment, or a Presidential Bid

Trump’s impeachment has been the San Francisco liberal’s primary aim for more than a year after many years bankrolling Democrats. In spite of his big spending for left-wing causes, the networks have failed to inform their audience about Steyer’s agenda.

Even before 2018, Steyer who made a fortune as a hedge-fund manager before selling his stake in the company in 2012, to focus more on politics. He spent $87.6 million on Democratic candidates and issues in 2016, making him the largest biggest individual donor of the election cycle. In 2014, he spent $75.4 million on candidates who supported his extreme climate views, but most of them lost.

Open Secrets listed almost $60,000 in direct donations to Democrats ($58,693) from Steyer between 2006 to 2018, including donations to Hillary Clinton and Rep. Maxine Waters, and a $250,000 donation to the Latino Victory PAC in 2016. Through his TomKat Charitable Trust he also gave millions to the liberal Center for American Progress think tank which is funded by many liberals including George Soros’s Open Society Foundations.

The Trump election prompted Steyer to get even more involved in liberal politics. Steyer has called Trump “a clear and present danger who is mentally unstable and armed with nuclear weapons.” In The Atlantic he called Trump “a criminal” who’s “attacking the American people,” and on Election Day he tweeted “The devil has been working hard these last two years, but as the saying goes, Not today, Satan!”

In May, at one of his town halls, Steyer failed to push back hard on a rally attendee who asked, “I just keep thinking, what’s the difference between him [Trump] and Hitler?” (The networks ignored the exchange). Rather than immediately rejecting the comparison, Steyer compared the two saying Trump was a “skillful and talented communicator,” and Hitler “was too,” before pointing out a HUGE difference — Hitler killed millions of people.

But his “aggressive stance” against Trump, far-left views, outrageous remarks and extreme characterizations of the president continued to be ignored by the evening news programs — even as Steyer reached millions across the country.

Since October 2017, Steyer committed $120 million to building a “political machine” with his already existing NextGen America organization and a newly formed group: Need to Impeach.

CNN described those efforts as Steyer’s attempt “to make himself the face of the ultra-liberal, anti-Trump resistance ...”

His grassroots efforts included tens of thousands of volunteers to send texts, make calls and writing more than a million notecards to voters ahead of the election.

Those efforts had an impact. CNN listed him as one of the billionaires who “helped Democrats win” and Need to Impeach lead strategist Kevin Mack told CNBC on Nov. 7, that at least 70 percent of the races it targeted were “won” — possibly as much as 76 percent after final counts.

The election is over, but Steyer’s efforts aren’t. Even before the election he told left-wing Slate, that a Democratic majority should investigate the Trump administration, “punish people” and disgrace the GOP rather than try to work with Republicans to get things done.

And he continued to demand impeachment in recent post-election media appearances.

“If you look at last night and you look at the popular vote, there was a referendum on the President, and he got crushed,” Steyer told CNN Nov. 7. He urged the new majority to pursue impeachment of Trump telling CNN they must challenge the “lawless” president.

On Nov. 8, just days after the election The New York Times published Steyer’s op-ed “Why Democrats Must Impeach the President.”

In it, Steyer argued that “As President Trump continues to accelerate his lawlessness, the new Democratic House majority must initiate impeachment proceedings against him as soon as it takes office in January.”

Still many think the political operation Steyer built, could pave the way — not just for an impeachment vote against Trump — but for a bid for the Democratic nomination for president. CNBC referred to Steyer and Michael Bloomberg as “kingmakers” for their role as some of the biggest spenders on the 2018 midterms. That article, CNN and many profiles of Steyer have also brought up the possibility he will run in 2020. Even CBSNews.com acknowledged after the election that with $120 million spent in 2018, Steyer is one of the Democrats who “could be the next president.”

Methodology: MRC Business searched Nexis for impeach or impeachment or Steyer and “Evening News” or “World News” or “Nightly News” between Oct. 19, 2017 and Nov. 10, 2018, in order to find reporting of Steyer’s midterms efforts. The result was 32 stories mentioning impeachment (none naming Steyer, but one referring to him as a “businessman” and one story mentioning Steyer as a mail bomb target, but not impeachment. A separate search for “Need to Impeach” or “NextGen” during the same time frame turned up one Evening News story about NextGen America’s get out the vote effort.