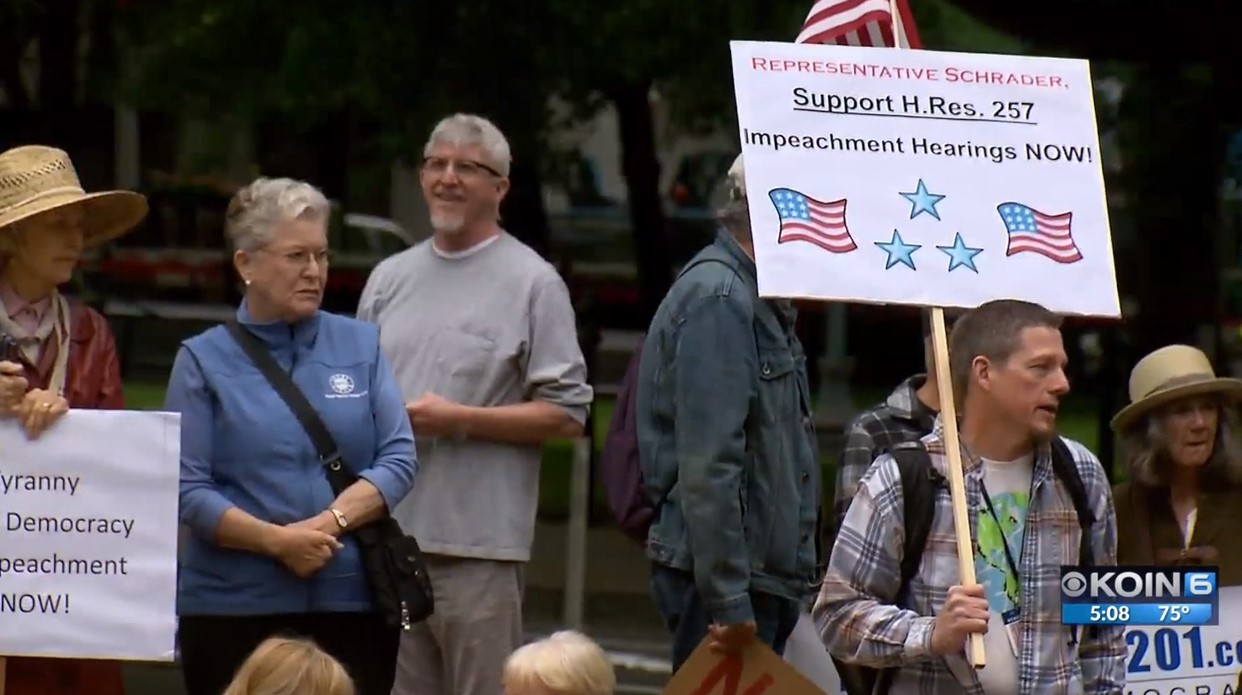 The left’s latest attempt to rally support for impeachment was a massive failure with everyone but Hollywood and some media. Liberal Billionaire Tom Steyer’s Need to Impeach group was joined by MoveOn, the Women’s March, Indivisible and others at an Impeach Trump Day of Action June 15.

A coalition of liberal groups including California Billionaire Tom Steyer’s Need to Impeach and MoveOn, the Women’s March, Indivisible and more held an Impeach Trump Day of Action June 15. Although, conservatives poked fun at the rallies that fell flat and had poor turnout — which might explain the minimal national media coverage of the events.

However, the top promoters of Trump disdain, AKA Hollywood celebrities and media types, tweeted demands to #ImpeachTrump and “help rescue democracy” in the days leading up to and during the cross-country rallies.

Will and Grace star Debra Messing, actor and producer John Cusack and Rosie O’Donnell were just a few Hollywood stars issuing tirades against the “criminal” “sick man” and “existential threat.” Some CNN contributors did too.

Hollywood meathead Rob Reiner thanked all the people planning to rally against Trump saying, “The lies and the racism and the criminality have to end. Thank you to everyone joining #ImpeachTrump protests this Saturday. If you want to see this sick man removed from office, please join. Over 130 planned.”

Messing promoted the events “Over 130 #ImpeachTrump rallies planned for this weekend. Time to get out there and push Congress to defend the Constitution and impeach this criminal president.”

In another frantic June 15 tweet, Messing added, “#ImpeachTrump #ImpeachmentInquiryNow We’ve been screaming from the rooftops that Trump LIED & OBSTRUCTED the investigation that PROVES he welcomed aid from a foreign adversary. He continues 2 Criminally obstruct the full facts being shared 2 the American ppl. Ok, are we DONE now?”

O’Donnell tweeted “TIME TO IMPEACH” and used the digital red pen to express herself in the hashtag: “#IMPEACH TRUMP”

Two and a Half Men’s Jon Cryer tweeted a picture of a child holding a sign “I DON’T LIKE DONALD TRUMP” and reacted, “Pretty much says it all #ImpeachTrump.” Sure, because disliking a president are the constitutional grounds for impeachment.

Cusack directed his anger towards House Speaker Nancy Pelosi because she hasn’t supported calls for impeachment yet.

“Pelosi has to go - it’s come to that - RT @PredragCvitano1: Remind me - for what exactly are we waiting to start the impeachment enquiry? #ImpeachTrump,” Cusack tweeted on June 14.

Modern Family producer Danny Zuker considered the anti-Trump rallies a fitting way to “mark the occasion” of Trump’s birthday and comedian Chelsea Handler tweeted, “This weekend you have a chance to do two of the things that make Trump angriest - protest him, and bring up impeachment. That’s all the reason you need to join an #ImpeachTrump rally.”

CNN and ABC contributor and podcast host Tara Setmayer wrote, “Trump is an existential threat to the republic.The POTUS justified&invited foreign interference. These comments are impeachable in and of themselves. This is unpatriotic, un-American & unworthy of the presidency & undermines our Nat’l security” followed by the red, angry swearing emoji.