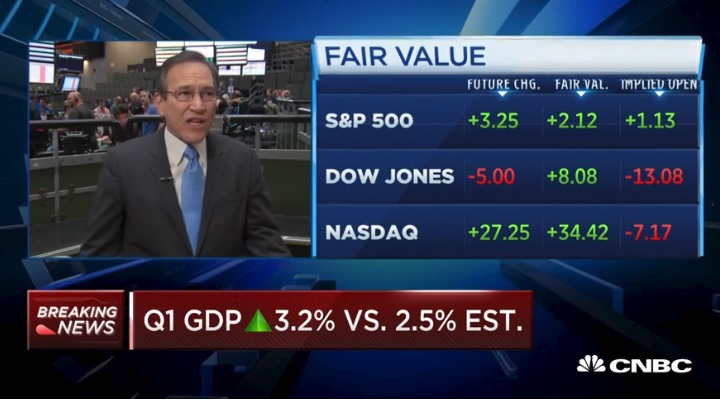 Economic growth bested expectations by nearly a percentage point in the first quarter, and “pushes back” against recent recession fears, according to CNBC.

“First look at first quarter GDP and it is a whopper! 3.2 percent.” on-air editor Rick Santelli announced on April 26. “A 3 handle on first quarter. It’s supposed to be the dog of the year in terms of which quarters excel. This is really powerful.”

First quarter growth has been sluggish for several years, and Santelli noted this was the best first-quarter number since 2015 (3.3 percent). The Bureau of Economic Analysis attributed the growth to personal consumption spending, government spending, inventory investment, and exports, according to Yahoo.

Bloomberg’s consensus forecast had anticipated 2.3 percent growth, while The Wall Street Journal survey estimated a slightly higher 2.5 percent. In mid-March (a month with daily talk of a potential recession), the Journal warned “growth is looking a little shaky.”

“It’s a pretty darn good quarter and certainly pushes back against this hard landing notion, all this talk of recession risks. I mean, the U.S. economy’s in pretty good shape,” he added.