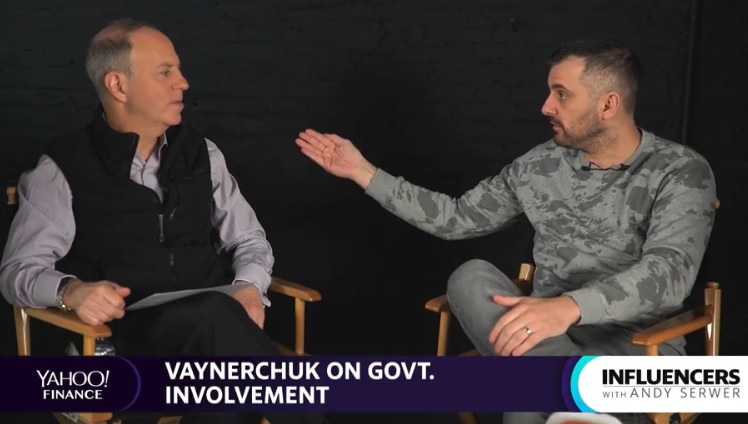 How do millionaire entrepreneurs feel about the government taking more of their money?

Yahoo Finance editor-in-chief Andy Serwer found out when he invited one of them on his Influencers show April 12. He asked entrepreneur Gary Vaynerchuck (also called Gary Vee) about “politicians like Alexandria Ocasio-Cortez who says [sic] we should have more government involvement in terms of people making higher wages.” For him, the matter had less to do with how much of his hard-earned money is given away, and more to do with how it would be spent.

“It’s an interesting question. You know, I was born in the Soviet Union, so I laugh when Americans try to paint liberals as socialists or communists, because that’s Americans that haven’t lived in communism,” Vaynerchuck said.

Before answering the question he described himself as “stunningly socially liberal” and also “an alpha entrepreneur and believe in many of the things of capitalism.” He doesn’t support the idea of old capitalists using money to change the “rules of merit,” but also expressed frustration over entitlement culture.

“I have many 20 year old kids hitting me saying, ‘Gary, you’re rich. You should give me your money.’ So I’m very scared of this slippery slope of massive entitlement.”

He continued, “So, you know more government involvement doesn’t hit me well in my alpha, player on the field, I’m an entrepreneur. It hits me tremendously well as I’m the human being and I want everybody to be healthy and happy to the best of our abilities. I think the answer is always somewhere in between.”

Ultimately his “problem” with government involvement and taxes was not about giving up a lot of his money, it’s about how that money gets spent and by whom.

“I’m willing to give up 95 percent of my earning. I really am,” Vaynerchuck said. “I’m willing to, I just want to be the one who gives it away.”

Why work “my face off, bleed in perpetuity” and give it to people who have “never operated anything,” are “third-generation wealthy” or are “ideology and you have no practical skills?”