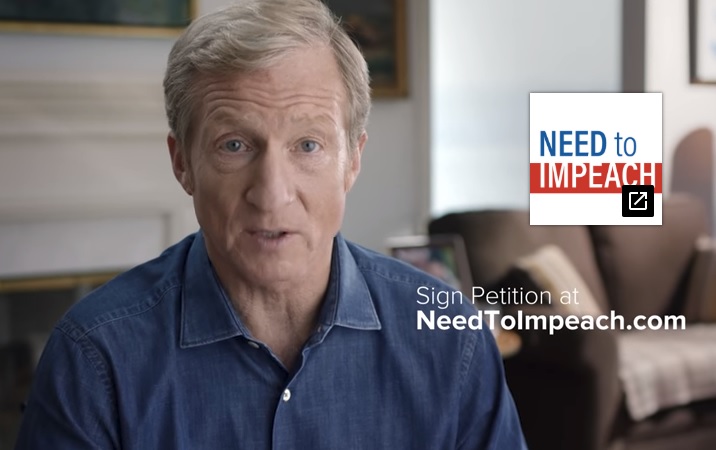 If Democrats manage to obtain a majority in the House of Representatives, lefty California billionaire and mega-donor Tom Steyer doesn’t want them working with the Republicans to get things done.

Steyer told Slate staff writer Jim Newell on Nov. 5, that would be a waste of time, and instead, the Democrats should investigate the Trump administration, “punish people” and disgrace the GOP. Since 2017, Steyer has been calling for Trump’s impeachment. He committed $120 million to midterm efforts including his “Need to Impeach” organization. His creation of a huge political machine has led many to anticipate a Steyer run for president in 2020.

Rather than work across the aisle, “The one thing [a Democratic majority] can control is oversight,” Steyer told Slate. “And then to me the question is: What can they do to punish people? What can they actively do so that there is a punishment, some cost, for lying to Congress, for breaking the law, for breaking your word to the Constitution? That’s the question. And that’s what impeachment is.”

According to Steyer, Republicans “ ... have shifted the conversation to places that are so crazy that there’s really no other side to the conversation” and that they’re outside the “range of reason” on policy issues.

Steyer even opposed working with Republicans who have sided with the left on climate change, such as Florida Rep. Carlos Curbelo who introduced a carbon tax bill, because “I’m sure Carlos Curbelo supported the president on 100 other horrible issues.”

Newell described Steyer as a “Billionaire who’s spent years building a ground-level political organization” and “who’s staking out a firm left-wing strategic position that Republicans aren’t to be negotiated with might be planning a 2020 presidential campaign.

But when Newell asked Steyer if he’s running Steyer claimed, “I don’t know what I’ll do ... Let me see what happens tomorrow and think about it.”