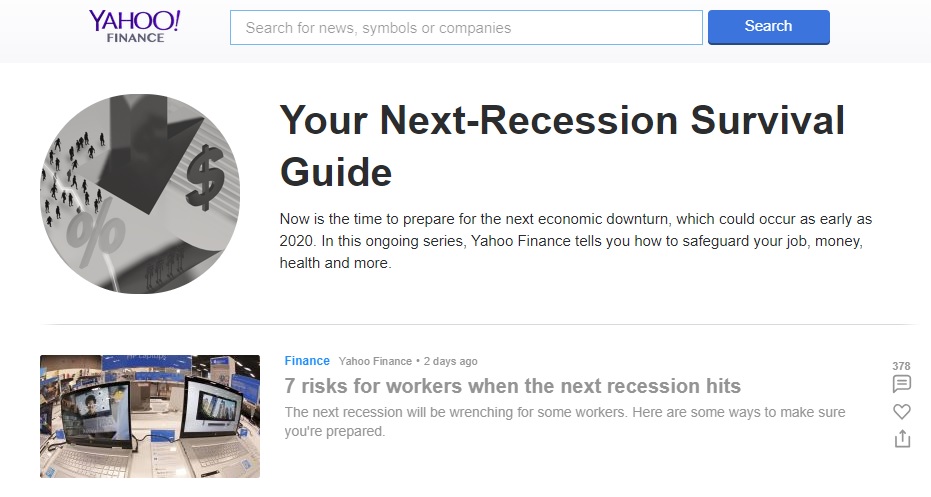 New York Times economist Paul Krugman immediately reacted to the 2016 election of Donald Trump by warning of a possible “global recession.” Perhaps Yahoo! was taking pointers for its latest series.

Even though the economy has been doing well, Yahoo! Finance just launched “Your Next-Recession Survival Guide” warning it is “time to prepare for the economic downturn, which could occur as early as 2020.” The new series began June 20.

Unemployment was just 3.8 percent in May, tied for the lowest rate since 1969, and some economists were already anticipating a very strong second quarter for economic growth thanks to strong retail sales and other data. Heck, The New York Times “ran out of words” to describe the robust May jobs numbers.

It’s virtually impossible to imagine a major news site making the decision to launch a recession guide when the economy is strong if they supported the president and his policy decisions. The liberal media worked hard to make President Obama look good, even under difficult economic circumstances.

In contrast, the media oppose Trump every chance they get. Trump ran on many economic promises and only time will tell if he succeeds. But even liberals see a successful economy a boon to Trump’s reelection chances.

Other media have promoted recession mongering and many have ignored good economic news. Now, Yahoo! will focus on recession — presumably until one happens.

Senior columnist Rick Newman wrote two pieces published on June 20. The first warned “Recessions occur every six years or so, on average. It’s been nine years since the last recession ended. By this time next year, the current economic expansion—if it continues—will be the longest in US history.”

Newman acknowledged the economy is “strong right now,” but said “the outlook darkens in 2020.”

“The economy looks safe for the next 12 months or so, but by late 2019 or 2020, the pieces may be in place for first recession since 2009,” Newman wrote. “The next recession will be wrenching for some workers. It will intensify the adoption of new technology that makes some jobs obsolete.”

He listed things workers can to do “raise the odds of staying employed and even getting ahead during a recession.” While that kind of advice isn’t bad, it is peculiar the liberal media decide now is the time to start doling out the survival advice.

Although some economists have been downbeat and worried a recession could come as early as 2020, not everyone agrees with them. Two prominent liberals — investor Warren Buffett and CEO Jamie Dimon — were both more optimistic than that.

On June 7, Buffett told CNBC “Right now, there’s not question. It’s feeling strong. I mean, if we’re in the sixth inning, we have our sluggers coming to bat right now.” Buffett said he’s “no good at predicting out two or three or five years from now, although I will say this: There’s no question in my mind that America’s going to be far ahead of where we are now 10, 20 and 30 years from now.”

Dimon concurred saying, “The way I look at it, there is nothing that is a real pothole.”

In general, forecasting is unreliable. Financial Times wrote in 2014 that an analysis of all 1990s economic forecasts concluded there was great similarity between them and “the predictive record of economists was terrible.”

Prakash Loungani, the author of the study, said “The record of failure to predict recessions is virtually unblemished.”