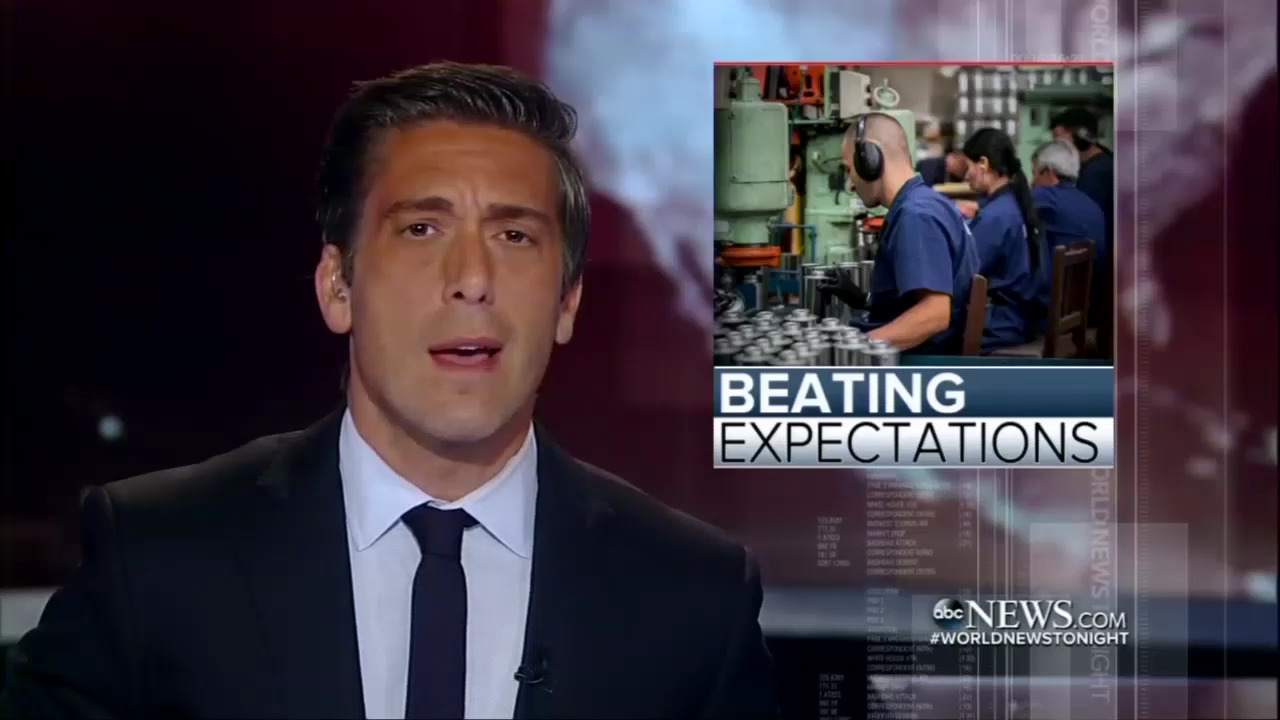 ABC’s World News Tonight with David Muir may have clinched the most viewers, but it spent the least amount of time on the nation’s 1.7 million job gains when compared to rivals on CBS and NBC.

In September, Muir’s newscast took the top spot with the highest number of viewers compared to CBS Evening News and NBC Nightly News, according to Deadline. ABC touted this in advertising saying it is “America’s most watched newscast,” but the show shortchanged its 8.3 million viewers on economic reporting about job on days the U.S. government released new employment data.

Once a month, usually the first Friday, the Bureau of Labor Statistics (BLS) announces the previous month’s unemployment rate and the number of jobs added or lost. 2017 was a good year for many job seekers. In the first 10 months of the year, more than 1.7 million jobs were created according to BLS data.

MRC Business watched and time tallied coverage of jobs on those three broadcast news programs the the same days the BLS released new jobs numbers beginning Feb. 3. World News Tonight with David Muir reported on jobs less than half as much as the other shows with just 3 minutes and 41 seconds combined on those nights.

That was less than half the time spent on jobs those nights from either of ABC’s competitors: CBS Evening News (8 minutes 25 seconds) and NBC Nightly News (7 minutes 48 seconds). 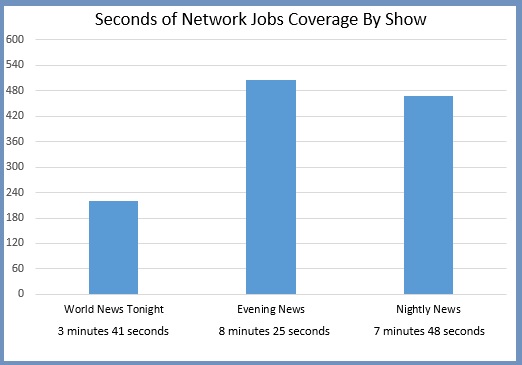 On Aug. 4, Muir spent a mere 18 seconds on the July jobs report before segueing into a much longer story about two “mega jackpots.” That jobs report “beat” expectations with 209,000 jobs and a 4.3 percent unemployment rate — “a 16 year low” Muir noted. He also told viewers wages were rising, up 2.5 percent from the year before.

Then Muir introduced the 1 minute 32 second lottery story as “a way to boost your pay a little faster.” ABC Correspondent Clayton Sandell was so excited about the huge Powerball and Mega Millions jackpots he ended his story holding up his tickets, even after noting the low odds of winning big — Powerball odds were 1 in more than 292 million.

Combined, that story along with June 2 coverage of the remarkable child spellers at Scripps National Spelling Bee, and March 10 coverage of viral video of a man’s children interrupting his BBC television appearance took up more of World News’ time than its total coverage of the national jobs reports (4 minutes 37 seconds vs. 3 minutes 41 seconds).

Methodology: The BLS released 2017 jobs data on Feb. 3, March 10, April 7, May 5, June 2, July 7, Aug. 4, Sept. 1, Oct. 6, and Nov. 3. MRC Business analysts watched World News Tonight with David Muir on ABC, Evening News on CBS and Nightly News on NBC to determine how much time each show spent covering jobs or unemployment on those nights including the coverage of the BLS data and follow up stories about reactions, companies trying to hire, and sectors of the economy losing jobs.