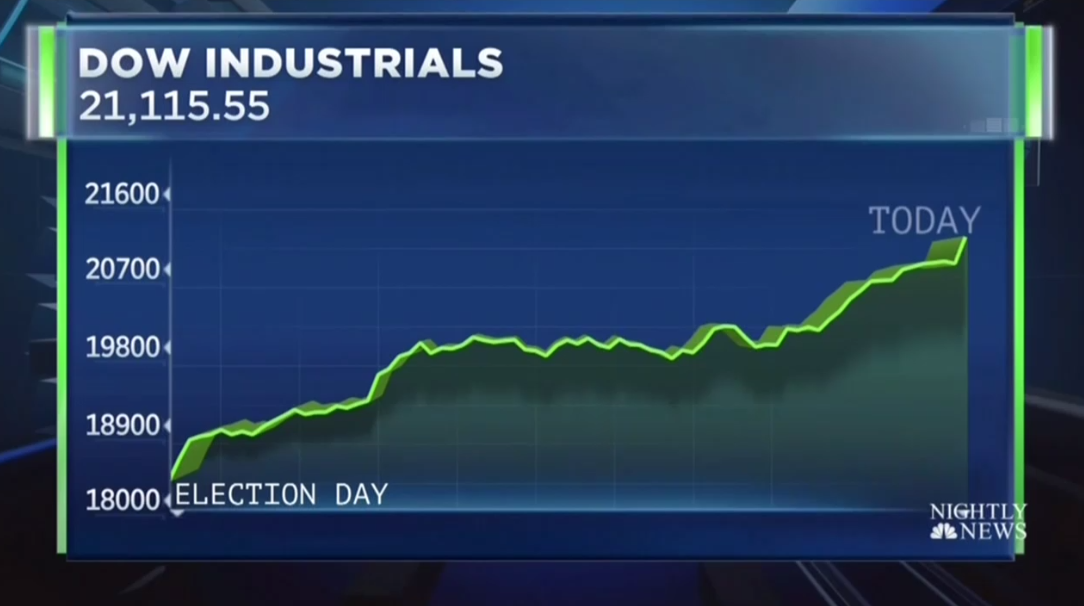 Twelve. That’s how many records the Dow Jones Industrial Average set in a row in 2017. Twelve new records, 12 sessions in a row.

Seven. That’s how few stories three combined networks devoted in their evening broadcasts to the record run that sent stocks so high, the market followed by closing above 21,000 for the very first time.

That “historic run,” meant little to ABC, CBS and NBC evening news programs which barely covered the “record surge” between Feb. 9, and March 2. If each record had been covered by the networks each night there would have been 36 stories.

It is difficult to imagine that this stock rally would have gotten so little coverage from the networks under a different administration. But this remarkable market rise happened under President Donald Trump and many of the liberal media are firmly anti-Trump, looking for any line of attack against him or way to downplay good news under his leadership.

The Dow Jones Industrial Average closed at new record highs for 12 straight sessions on Feb. 27, a streak which tied a 1987 milestone for “longest record-setting streak,” Marketwatch reported. Yet that night, not one of the three evening news programs brought up the stock market’s remarkable climb.

After dipping slightly for one business day, the Dow jumped again — to set a new record for closing above 21,000 for the first time ever on March 1.

The big round number of Dow 21K managed to get all three networks’ attention. That night, NBC Nightly News anchor Lester Holt acknowledged the “historic run.” Holt turned to business correspondent Ali Velshi who said it “we have to call it a “Trump rally” and told viewers why.

“The Dow is up 15 percent from the close on Election Day. Markets are liking what they are hearing from this president, in particular, driving today’s rally is what President Trump reiterated last night about reducing regulation, infrastructure as Tom was talking and most importantly cutting corporate taxes,” Velshi said.

On March 1, Evening News also reported the “Trump rally” and the “record close” on March 1, citing Trump’s talk of infrastructure spending, tax reform and reduced regulation as the driving forces, while World News anchor David Muir also acknowledged “the gains since Election Day have been historic.”

This isn’t the first “Trump stock market rally” the networks have minimized. In December 2016, the Dow neared 20,000 for the first time ever. That index also set 16 closing-day record highs after Trump’s election and Dec. 13. But ABC, CBS and NBC evening news shows aired just 11 stories, fewer stories than records. And forty-five percent of those stories ignored Trump.