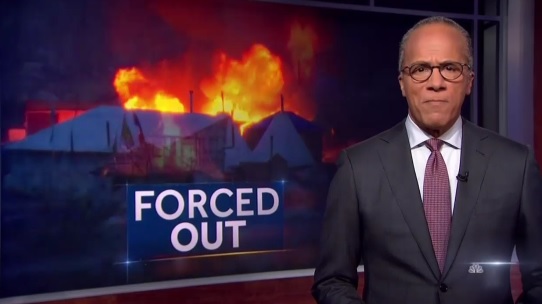 Just as they didn’t seem to mind Dakota Access Pipeline protesters’ arson, rioting and violence, the network news media failed to condemn the hypocrisy of self-proclaimed “water protectors” leaving behind mountains of trash now threatening to pollute the Missouri River.

The last people protesting the Dakota Access Pipeline were evicted after North Dakota Gov. Doug Burgum ordered everyone to leave over safety and environmental concerns due to all that debris.

The remaining few were given a choice — stay and be arrested, or leave peacefully by the Feb. 22, deadline. Dozens were arrested after the deadline. Those who left would be given fresh clothing, bus fare, food and hotel vouchers, according to USA Today. Curiously, provisions for those leaving wasn’t mentioned in any of the ABC, CBS or NBC stories. Network news coverage of that “dramatic final showdown” continued to portray protesters favorably — in spite of the chaos they left behind.

A million-dollar cleanup is underway to remove trash, abandoned camp materials, stranded cars, motor homes and more, according to the Bismark Tribune. That was the estimated cost even after Standing Rock Sioux members spent weeks trying to clean up the Oceti Sakowin protest camp on Army Corps. of Engineer’s-owned property.

Because the land is also a floodplain, the Corps. and state officials grew concerned that spring flooding would wash waste and debris from the camp into the Missouri River and cause an “environmental disaster.” The potential ecological threat from the protesters’ abandoned trash only came up in half the ABC, CBS and NBC morning and evening news mentions of the evacuation (4 of 8). Even when it was mentioned, some reporters undermined the argument.

NBC Nightly News interviewed the governor’s adviser Levi Bachmeier who said authorities “want to prevent any environmental or ecological disaster occurring from everything that we see behind us here washing away in the Missouri River.”

“It’s a mess down there, so it’s really, really hard to find these animals and get them,” Julie Shirado of Furry Friends told KFYR-TV in Bismarck.

The reports remained sympathetic to the anti-pipeline crowd. In addition to ignoring the garbage in half of the mentions, none of the stories mentioned that a 7 year old and a 17 year old suffered burns from fires protesters set before leaving.

CBS Evening News interviewed activist and attorney Chase Iron Eyes who referred to the arrests and eviction as a “forced removal,” before labeling it an “ethnic cleansing.” That quote turned up in multiple CBS reports and was never criticized or challenged.

ABC World News found a crying woman who said she’s a mother and wasn’t trying to get hurt or arrested. She insisted, “I’m not a criminal.”

Previous network coverage also favored opponents of the pipeline project. The broadcast networks ignored the cost of policing the protests. The Morton County Sheriff’s Department announced on Jan. 9, that the price tag was a whopping $22.3 million since early August. The evening news programs said nothing about it on Jan. 10.

Pipeline opponents also dominated network reports on the morning and evening news in a December analysis with an 8 to 0 ratio of opponents to proponents. Those broadcasts were even more skewed than the 7 to 1 ratio of coverage between Oct. 27, and Nov. 15, 2016.