Nets Ignore Poll Showing 62% of Americans Think U.S. Is in Recession for Over a Week

The ABC, CBS and NBC evening news shows ignored reporting on a devastating poll that shows the American people are not buying President Joe Biden’s spin on the meaning of a recession. 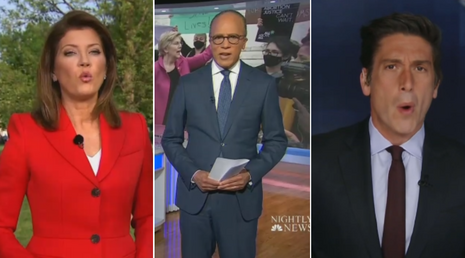 An IBD/TIPP poll released Aug. 9 found that a “solid majority of Americans — 62% — think the U.S. economy is in a recession, up from 58% a month ago, 53% in June and 48% in May.” This followed news that the U.S. GDP contracted for the second month in a row to meet the technical definition of a recession.

To make the report worse, the “IBD/TIPP Economic Optimism Index, an early month read on consumer confidence, slipped fourth-tenths [sic] of a point to 38.1, matching June's reading for the lowest since August 2011.”

This is just par for the course for the Big Three. The evening networks have been twisting themselves into pretzels on the economy in recent days either by avoiding the admission that the U.S. is in a recession or by legitimizing Biden’s redefinition of the term.

In a more recent example, an Aug. 15 report that The National Association of Home Builders (NAHB)/Wells Fargo Housing Market Index “dropped 6 points in August to 49” for its eighth consecutive monthly decline.

“Anything below a 50 is considered negative,” according to CNBC. Fox Business reported that the result marked the “worst stretch for the housing market since the 2008 financial crisis.” NAHB Chief Economist Robert Dietz said in a statement obtained by CNBC that “‘[t]ighter monetary policy from the Federal Reserve and persistently elevated construction costs have brought on a housing recession.’” All three networks ignored the “‘housing recession’” news during their Aug. 15 broadcasts. [Emphasis added.]

NBC Nightly News, however, decided to cover the “housing recession” during their Aug. 18 broadcasts, just two days after MRC Business called the network out for ignoring the story.

Here was NBC's broadcast on Thursday:

But It appears the Big Three are still doing everything they can to avoid normalizing the “recession” buzzword in an effort to help the Democratic Party limp across the finish line in the November midterm elections. But it appears equally clear that the American people aren’t buying their spin.