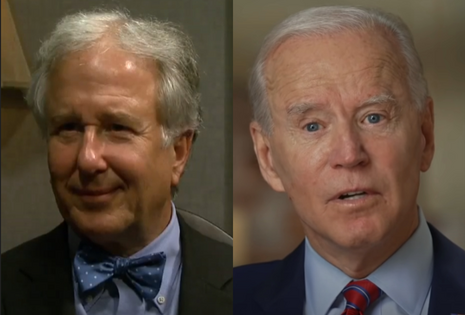 Winkler published an op-ed for his liberal publication with an on-the-nose headline that smacked of lunacy: “Blame Election Deniers for Faltering Consumer Sentiment.”

According to Winkler’s senseless conflation, it’s “no wonder” that Americans despise the 40-year high inflation-rattled economy when “about 70% of Republicans believ[ed] incorrectly that Joe Biden lost the 2020 presidential election when he won it by more than seven million votes.”

According to Winkler, those pesky “Republicans denying the 2020 election are easy prey for mischievous economic messaging.”

It’s unclear how Winkler could make that connection in the face of U.S. GDP contracting in two consecutive quarters to meet the technical definition of a recession. Perhaps this could be the reason why at least 69 percent of Americans “feel” the economy is getting worse?

Nah, the GDP decline doesn’t count, says Winkler. “[T]here is no ‘official’ recession until the nonpartisan economists of the National Bureau of Economic Research declare it.” This is the same Winkler who once championed Biden’s so-called “unbeatable” performance on the economy in December, just before inflation and energy prices skyrocketed in 2022. Winkler’s hair-splitting praise of the NBER’s crystal ball deserves a reality check.

American Institute for Economic Research Research Education Director Phillip Magness stated in a Wall Street Journal op-ed: “There is no federal statute that appoints the NBER as the official arbiter of recessions. Quite the contrary, the federal government has historically followed the conventional textbook definition” of two quarters of negative GDP growth.

But Winkler tried to prop up the flailing left’s atrocious economic policies that exacerbated much of the American inflation crisis, the latest being the $739 billion so-called “Inflation Reduction Act” (IRA).

Winkler wielded the sentiment of former Obama administration economist Larry Summers to praise how the IRA supposedly “helps Biden slow inflation too.” That’s despite the Congressional Budget Office projecting that the IRA would have a “negligible effect” on reducing inflation. The Tax Foundation also found that “[b]y reducing long-run economic growth, the bill worsens inflation by constraining the productive capacity of the economy.”

But in Winkler’s dreamland, “Biden is changing the trajectory of the economy in myriad ways benefiting American consumers that are ‘highly consequential,” citing a piece by Axios co-founder Mike Allen to make his point.

Winkler mourned that “None of this is apparent in the [abysmal] Michigan sentiment index, perhaps because Republicans running for office across the country in 2022 are still denying the results of the 2020 election.”

Or maybe it has something to do with consumers watching the prices they face daily soar by a devastating 9.1 percent year-over-year in June?

Conservatives are under attack. Contact Bloomberg News at letters@bloomberg.net and demand it distance itself from Winkler’s pro-Biden nonsense.