Hey CNN, Remember that ‘Below $3 a Gallon’ Gas ‘Soon’ Prediction You Regurgitated in December? 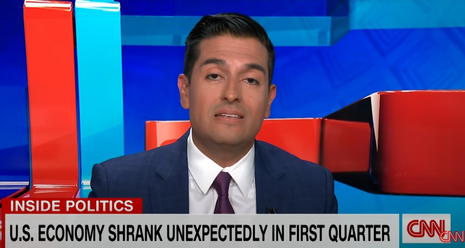 CNN is experiencing the “life comes at you fast” adage in real time as a poor government prediction it touted on skyrocketing gas prices came back to haunt the network.

CNN reporter Matt Egan published a Dec. 8 story with a foolish headline that needs no explanation in light of recent news on gas prices: “Gas prices will tumble below $3 a gallon soon, government forecasts.”

Looks like the projection missed by roughly $2.12 at this point.

Egan wrote in his Dec. 8 piece that,“Prices at the pump have finally started to creep lower, and that trend should significantly accelerate in the coming months, according to new government forecasts.” To bolster his argument further, Egan even touted how “Citigroup went further Tuesday, saying the energy boom that is fanning the flames of inflation is over.” AAA reported June 13 that the current average price for regular unleaded gasoline rose to $5.014 Yikes. [Emphasis added.]

But portraying a hare-brained prediction as news is par for the course for the same so-called “reporter” who once claimed in July 2021 that Biden “isn't to blame for high gas prices -- and has few options to lower them.” Twitter users mocked Egan’s story for the pro-Biden spin at the time. Not only did Egan later celebrate the much higher $3.35-a-gallon gas as some kind of “relief” in a Dec. 7 story; he also credited Biden’s “intervention” as “part” of gas prices slightly contracted. So, Biden isn’t responsible for rising gas prices, but he’s responsible for a slight dip in prices?

Egan’s behavior is a mere symptom of a broader plague of nonsense that has diseased CNN’s overall coverage of energy inflation under Biden. Take a look at the montage below of CNN talking heads twisting themselves into pretzels trying to veneer positive coverage on America’s struggles at the pump across two weeks of coverage in November and December:

Egan himself developed a chronically bad habit of spinning bad economic news to protect the president. When news broke in April 2022 that U.S. GDP contracted 1.4 percent in the first quarter against expectations of an increase, Egan whitewashed the terrible statistic as “quirky” and pleaded that people “shouldn’t panic about these numbers.” The Bureau of Economic Analysis later released its second estimate showing that GDP actually decreased a worse-than-expected 1.5 percent for “the worst quarter since the pandemic-scarred Q2 of 2020.”

Conservatives are under attack. Contact CNN at 404-827-1500 and demand the outlet quit defending Biden on skyrocketing gas prices.