WATCH: CNBC’s Santelli Nukes Fed After Devastating Inflation Report: It Has ‘Done Nothing!’ 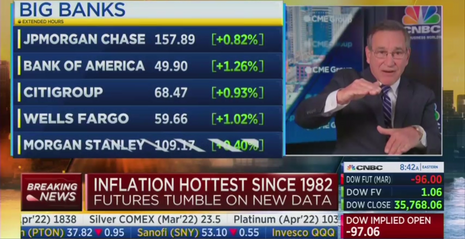 Santelli ripped the Fed for its lackluster approach to fighting inflation along with Leuthold Group Chief Investment Strategist Jim Paulsen's seemingly out-of-touch positive prediction on the U.S inflation outlook during the Feb. 10 edition of Squawk Box. Paulsen predicted that inflation will recede from 7.5 percent towards the end of the year down to around three and a half percent and four percent as the economy opens up and the Fed tightens monetary policy.

“I just love what [Paulson is] saying because I don’t really believe much of it, and I agree usually with everything he says.” Santelli then dropped the hammer on Paulsen’s argument: “Just because [inflation] came down from seven, the real issue is where it started [two percent], and I think that’s where everybody’s going to fall into this trap: ‘Oh my God lookit! Half of this inflation has disappeared!’ But it’s still significantly higher than pre-COVID!”

But CNBC senior economics reporter Steve Liesman took objection to Santelli’s rebuke and tried to be the PR guy for the Fed: “Rick, c’mon!” He continued: “Rick, there’s ninety basis points of tightening in the two-year” since Fed Chairman Jerome Powell pivoted on monetary policy. Santelli slapped Liesman’s argument down by noting that it’s the market that’s leading the charge on tightening, not the Fed: “The market’s doing it because the Fed is behind the curve,” Santelli retorted.

Surprisingly, Paulsen agreed with Santelli’s frustrations about the Fed: “I totally agree. The Fed has done absolutely nothing.” But Paulson still tried to prop up his view that the market running point on monetary tightening in the current economy would eventually ease inflationary pressures. Santelli, still not convinced, called out Paulsen for stating the obvious: “An economy that’s got to be slowed down, of course, is going to experience less pressures on the demand side. Of course! That’s the whole point of it!”