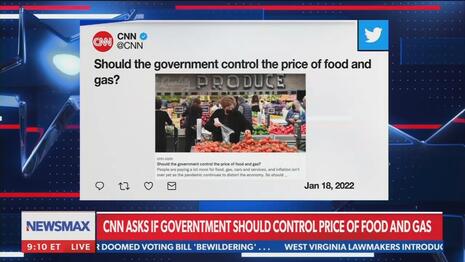 CNN tried to normalize the communist idea of the government controlling the prices of food and gas as a way to combat inflation. The idea was so bonkers, CNN even admitted that economists have largely panned the suggestion.

CNN’s ridiculous story was headlined, “Should the government control the price of food and gas?” The outlet spun the idea that it's “been done before, typically during times of crisis.” But, as CNN conceded: “for most mainstream economists, the answer to this question is a resounding ‘no.’” Former President Barack Obama’s Council of Economic Advisers Chairman Austan Goolsbee reportedly responded in a survey on the merit of price controls: “Just stop. Seriously.”

But CNN still attempted to downplay the ludicrousness of price controls, saying: “There is plenty of precedent for price controls in the United States, but you have to look a few decades back.” CNN’s tweet of its story scored a massive ratio with Twitter users. As of Jan. 20, CNN’s tweet has over 7,100 comments and just over 1,400 likes. 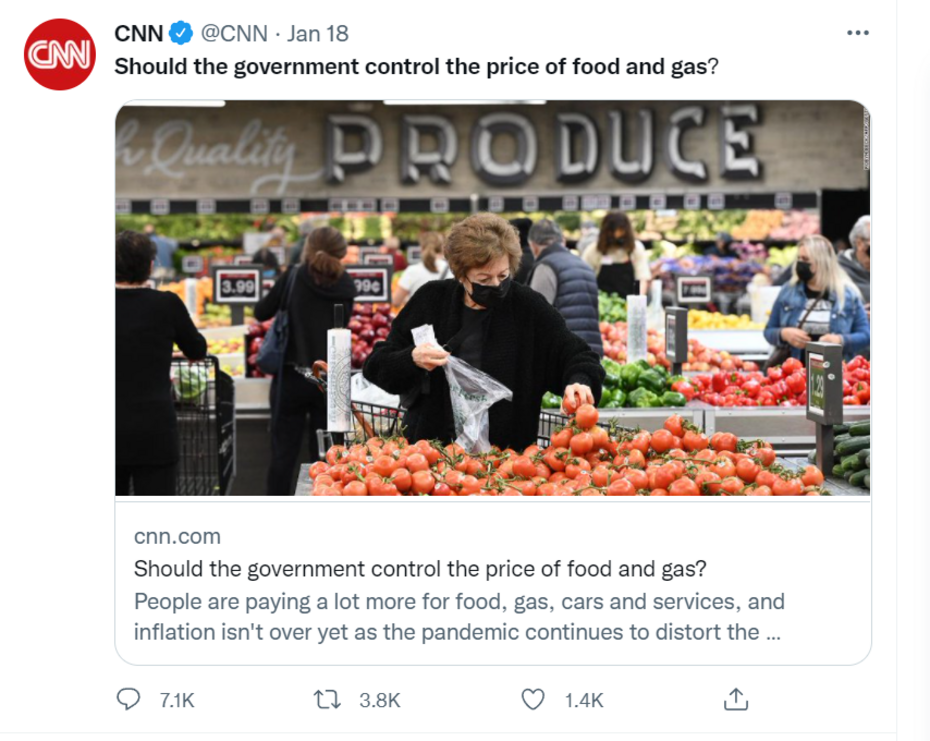 It’s a wonder why CNN tried to treat price controls as a serious idea even as it repeatedly undercut its own reporting throughout its story. For example, CNN said in the second paragraph, “Limiting how much companies can charge will distort markets, [mainstream economists] argue, causing shortages and exacerbating supply chain problems while only temporarily reducing inflation.”

Then, CNN tried to blame politicians for not taking price controls more seriously. It even raised the Marxist concept of class warfare to do it:

The attitude toward price controls appears to be similar in Washington, where policymakers have shown little enthusiasm for even targeted or temporary measures despite growing pressure on middle class families that feel the pain of price increases more than the rich.

Later, CNN managed to find a fringe expert who tried to legitimize the idea of price controls:

Isabella Weber, an assistant professor of economics at the University of Massachusetts Amherst, argues that price controls have a role to play in the United States, too, as policymakers try to address inflation caused by the extraordinary circumstances of the pandemic.

Weber happens to be the recipient of the 2016 Young Scholars Initiative Conference Award by the Institute for New Economic Thinking (INET) in conjunction with the European Society for the History of Economic Thought. INET is a leftist think tank founded with a $50 million gift by liberal billionaire George Soros. INET “promotes an expansion of left-wing economics education in a search for a new statist economic policy consensus,” according to Influence Watch. CNN didn’t mention the connection to Soros.

CNN pointed out that skeptical economists “argue that capping prices encourages companies to produce less of a product, while making it more attractive to consumers.” However, CNN attempted to downplay economic reality again by rashly pointing to Argentina and Hungary to claim: “[The risk of low supply and high demand] doesn't stop governments around the world from resorting to price controls when inflation gets out of hand.”

Conservatives are under attack. Contact CNN at (404) 827-1500 and demand the outlet stop treating communist price controls like a serious idea.